The security clampdown first began on the night of August 4 ahead of the Centre’s abrogation Article 370 and splitting the State into two UTs. 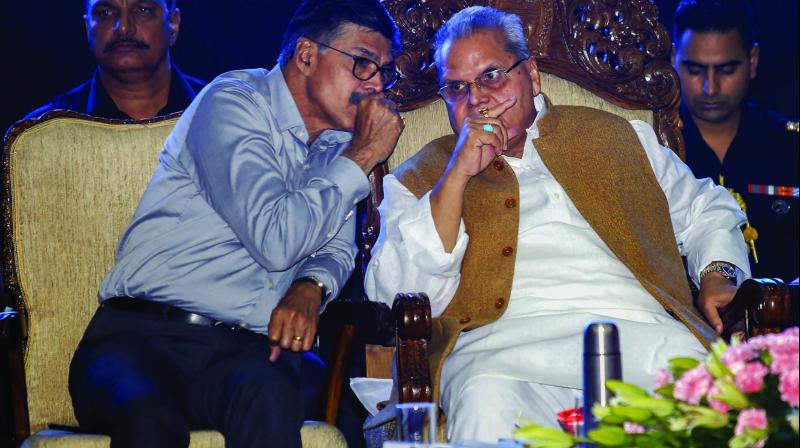 Srinagar: The security forces have been put on high alert in Srinagar and its neighbourhood following reports that more than one group of militants may have sneaked into Jammu and Kashmir’s summer capital over past few days.

The J&K police and Central armed police forces have intensified checking of vehicles, particularly two-wheelers, across Srinagar. Also, random search operations are being conducted at places instantaneously chosen by the security forces for the pursuit whereas new makeshift barriers and drop-gates have been laid in the city as part of stepped up security arrangement.

A government official, who spoke to this newspaper on the condition of anonymity, said that there are reports that gunmen in small groups have been seen roaming in some parts of the city over past few days.

Though the authorities are still trying to determine their veracity, these reports received credence after some local newspapers operating from Srinagar’s media hub Mushtaq Press Enclave were on Friday telephoned by anonymous people asking them to remove or switch off outer CCTV cameras installed at their premises “as these may create problems for our people.” On learning about it, senior police officials visited these newspaper offices to ascertain information and were also collecting the call details.  Residents of a few Srinagar areas too have received similar diktat, seemingly from militant groups.

Flyers and posters in the name of various militant groups have also been in circulation, not only in Srinagar but also in some other parts of the Valley, asking people to remain steadfast in their “struggle” against “Indian occupation”. These also seek to “guide” them on the current impasse over the abrogation of J&K’s special status under Article 370 of the Constitution and bifurcating the state into two Union Territories. The authorities have also reports that militants belonging to mainly Hizb-ul-Mujahideen and Lashkar-e-Tayyaba are trying to regroup in some parts of the Valley.

The official said that several measures including resuming cordon-and-search operations and imposing night curfews in select areas are under consideration of the authorities to counteract any attempts that may be made by militants and their over-ground workers to disturb peace in the Valley.

Meanwhile, normal life remained affected in the Valley on the 41th consecutive day on Saturday with shops and other businesses shut and public transport off the roads. Tensions persist even though restrictions under Section 144 CrPc re-imposed on most parts of Srinagar on Friday in anticipation of protests and violence were lifted on Saturday. However, five police station areas of central Srinagar continued to reel under security clampdown, making life difficult for the residents.

Thousands of security forces in riot gear continued to remain deployed in Srinagar and other major towns of the Valley to maintain law and order. The security clampdown first began on the night of August 4 ahead of the Centre’s abrogation Article 370 and splitting the State into two UTs.

A report from Kishtwar said that the day curfew has been lifted from eastern town even though search operation for three suspected militants who had snatched the service rifle from a personal security officer of a local People’s Democratic Party (PDP) leader continued for the second day running on Saturday.

Before driving away in the politician’s car, the gunmen had kept him, his family and domestic help hostage for more than ten hours, the police and family had said.

Nasir’s brother Dr. Sheikh Nazir had said that the militants had barged into the house of PDP leader and after keeping the family hostage whole night left the premises on Friday morning along with the INSAS rifle of his PSO. “Before driving away in my brother’s Wagon R they threatened to kill him and his family members saying ‘you all are Indians, the traitors’ and that ‘we have instructions to eliminate all such people.” The police sources had said that there was a scuffle between the militants and the politician’s PSO who was eventually overpowered by the former.