He said that the Centre was eager to help the people and urged them to come forward with their demands. 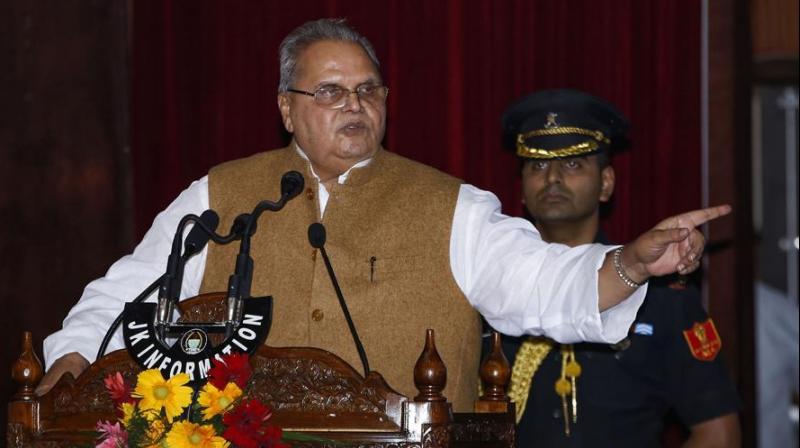 The governor said that the “tremendous work” done by him cannot be matched by the elected governments that have served the former state in the past. (Photo: PTI)

Srinagar: Jammu and Kashmir Governor Satya Pal Malik said that when he took charge of the erstwhile state of Jannu and Kashmir, the message from Prime Minister Narendra Modi was to make it “shine so much” that the people of Pakistan occupied Kashmir (PoK) would want to come and settle here. Malik was speaking at a public function in Srinagar.

The governor said that the “tremendous work” done by him cannot be matched by the elected governments that have served the former state in the past.

He said that the Centre was eager to help the people of the region and urged them to come forward with their demands, Hindustan Times reported.

“The Central government has given us 8 medical colleges this year alone, which is more than what has been given to any other state in the country. We are soon going to have 4,500 doctors in the state. This is the perfect time for development in the region, I would request the people to keep the pressure on their politicians. Union Home Minister Amit Shahji’s meeting with sarpanch of the villages from the state is a sign that the Centre is standing there with open arms,” Malik said.

Jammu and Kashmir was placed under Governor’s rule last year in June after BJP pulled out of the coalition government with PDP. Some months later the state was put under President’s rule.

In a televised address to the nation three days after the far reaching decision, PM Modi sought to assuage concerns of the people saying J&K will not remain a union territory for long.

“I want to assure friends of J&K that the situation will gradually return to normalcy and their difficulties will ease,” PM Modi said in his address.

The prime minister made a strong defence of scrapping the provisions of Article 370, saying the region’s special status offered it nothing but separatism, terrorism, corruption and family rule, while giving a handle to Pakistan to push its divisive agenda.