The special cell arrested Khalid on Sunday night, after 11 hours of interrogation. 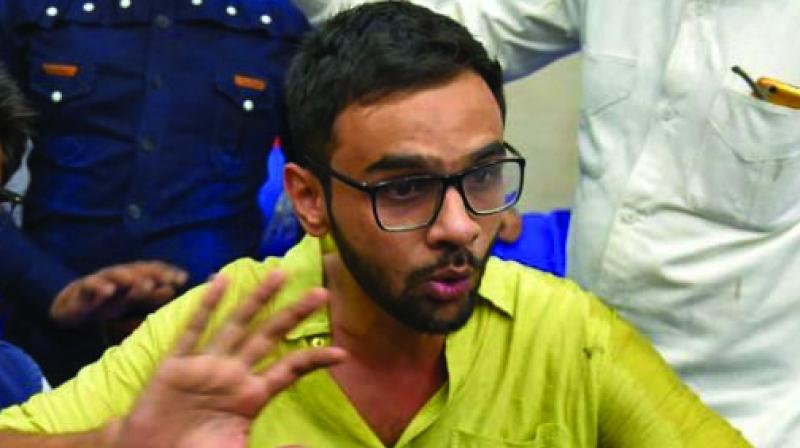 NEW DELHI: Former Jawaharlal Nehru University (JNU) student Umar Khalid has been arrested by the Delhi Police’s special cell for his alleged role in the riots in north-east Delhi in February this year. The FIR against Khalid alleges that he made provocative speeches at two different places and appealed to citizens to come out on streets and block roads during Donald Trump’s visit to India.

The special cell arrested Khalid on Sunday night, after 11 hours of interrogation. Earlier, police had also seized his mobile phone.

While seeking Khalid’s police custody, Delhi Police stated in the Karkadooma court that their computer team has extracted 40 GB of data from Khalid’s mobile phone and they want to question him about it. It runs into 11 lakh pages.

Delhi Police was granted 10 days’ custody to interrogate him.

In Khaild’s speech against the Citizenship Amendment Act in Amravati, that went viral on social media, and one of the two that the police is focusing on, he can be heard as saying “when Donald Trump comes to India on February 24, we will say that the Prime Minister and the government of India are trying to divide the country… They are destroying the values of Mahatma Gandhi, and the people of India are fighting against them. If those in power want to divide India, the people of India are ready to unite the country.”

In the FIR filed against Mr Khalid, Delhi Police has claimed that the communal violence that broke out was a premeditated conspiracy, allegedly carried out by Khalid and two others, short film producer Rahul Roy and documentary filmmaker Saba Dewan. The trio have been booked for offences of sedition, murder, attempt to murder, promoting enmity between different groups on grounds of religion and rioting.

Khalid was earlier charged under the stringent Unlawful Activities (Prevention) Act in another case related to the riots.

Roy’s name appeared in the supplementary chargesheet filed by the police in connection with the riots. “Though Dewan has not mentioned in the chargesheet, the two were part of a WhatsApp group called ‘Delhi Protests Support Group’,” said a police source.

The police has also summoned Mr Roy and Ms Dewan for questioning in connection with the riots.

According to Anil Mittal, the additional public relations officer of Delhi Police, “A total of 751 FIRs have been registered in connection with the riots cases so far. So far, 1,575 people have been arrested, out of which 1,153 accused have been charge-sheeted, with 250 chargesheets having been filed so far.”

Numerous human rights groups have accused the Delhi Police of carrying out a biased investigation.