100 yrs of the Battle of Haifa: Remembering Indian heroes 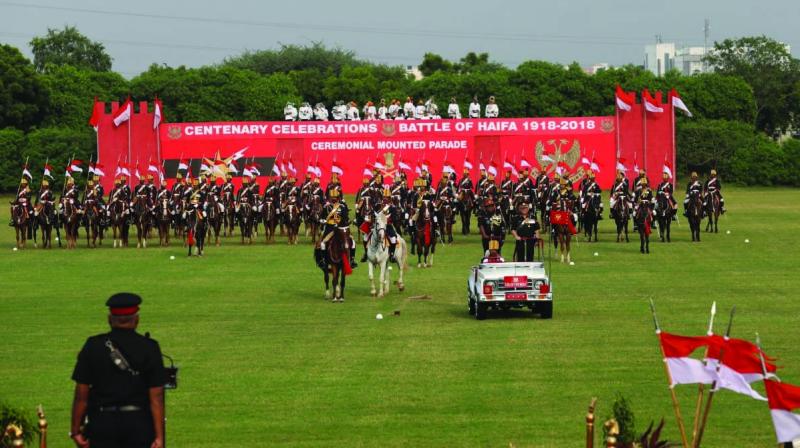 Major Singh and the bold Indian soldiers are very dear to us and this centenary celebration is special to us… (Major) Dalpat Singh not only changed the history of my city but the history of the Middle East… We have changed the whole textbooks to insert the story of the Indian troops because this is an important part of our history and legacy. It is important that the students know who liberated their city,” mayor of Haifa, Yona Yahav, told the gathering on September 6, 2018 at the ceremony to pay tributes to Indian soldiers, killed in the Battle of Haifa, on September 23, 1918.

Mr Yahav informed the gathering that once he became aware of the sacrifices of the Indian soldiers in liberating Haifa, he made efforts to get the information into school textbooks. History textbooks from Class 3 to 5 teach about the story of the liberation of Haifa by Indian soldiers.

Organised by the mayor of Haifa and embassy of India at Tel Aviv, the tribute ceremony was attended by ambassadors, military attaches, representatives from Israeli defence forces (IDF) and members of the Indian community, including the descendant of the erstwhile ruler of Jodhpur, Gaj Singh and Brigadier M.S. Jodha, grandson of Captain Aman Singh Bahadur, martyred in the Haifa battle. Also attending was an Indian delegation, including a detachment of 61st Cavalry, led by Maj. Gen. V.D. Dogra. The Guard of Honour was drawn from the Indian contingent of United Nations Disengagement Observer Force (UNDOF) and a contingent of IDF also participated in the ceremony.

On January 14, 2018 Prime Minister Narendra Modi broke protocol by receiving his visiting Israeli counterpart Benjamin Netanyahu at the airport, from where both proceeded to the Teen Murti traffic roundabout to unveil the plaque renaming it as “Teen Murti-Haifa Chowk”, in remembrance of the Indian soldiers who laid their lives to liberate the Israeli city of Haifa during the World War I.

In July 2017, when Prime Minister Modi visited Israel, both he and Prime Minister Natanyahu laid wreaths at the “Indian War Cemetery” in Haifa and unveiled a plaque commemorating Maj. Dalpat Singh, known as the “Hero of Haifa”. Mr Modi wrote in the visitor’s book: “I am deeply honoured to stand here today to salute the valiant Indian soldiers, who led down their lives for the liberation of Haifa during the WWI. The exceptional bravery and supreme sacrifice of Major Thakur Dalpat Singh MC, the ‘Hero of Haifa’ and his men, will be remembered forever and continue to inspire generations to come. Next year, the centenary of the Battle of Haifa will present another opportunity to mark this enduring bond between India and Israel.”

On the morning of September 23, 2018, the Army Chief and Colonel of the 61st Cavalry, Gen. Bipin Rawat attended the centenary celebrations of the Battle of Haifa at 61st Cavalry Jaipur. In the series of events the chief reviewed the ceremonial mounting parade, laid a wreath at Ashwa Shakti Haifa Parisar, released a first-day cover and attended the Barakhana (meal with all ranks).

On the same day in the afternoon there was a wreath laying ceremony at Delhi’s Teen Murti-Haifa Chowk. The war memorial and the entire traffic circle was festooned with flowers and national flags of India and Israel and lined all around by soldiers of 61st Cavalry in their ceremonial uniforms. Present for the occasion were Israel’s charge d’affairs Maya Kadosh, Indian Army Chief Gen. Rawat, director-general mechanised forces Lt. Gen. M.J.S. Kahlon, President, Cavalry Officers’ Association Lt. Gen. Amit Sharma (Retd), Defence Attaches of the UK and Israel, former commandants of 61st Cavalry and serving and retired officers of the Indian Army.

The Battle of Haifa

The 15th Imperial Service Cavalry Brigade was formed from Imperial Service Troops provided by the Indian princely states of Hyderabad, Mysore, Patiala, Alwar and Jodhpur, which each provided a regiment of lancers. Bhavnagar, Kashmir, Kathiawar and Idar provided smaller detachments for the brigade.

Having arrived in Egypt in October 1914 and performing various operational tasks, in autumn 1918, the brigade was a part of Gen. Allenby forces sweeping northwards through Palestine and mopping up the remnants of the Turkish 7th and 8th armies and their German, Austrian and Hungarian allies in the last great cavalry campaign in history.

On September 23, 1918 the brigade, less the Hyderabad Lancers (which was ordered to escort 12,000 prisoners from Lejjum to Kenkur on September 22) was ordered to advance and capture Haifa, in present-day Israel, north of Jerusalem on the southern shore of the Bay of Acre on the Mediterranean coast. The road and railway leading into the town is dominated by the steep slopes of Mount Carmel to the south and bounded by the swift and swampy Nahr al Muqatta or River Kishon to the north.

Jodhpur Lancers launched a mounted attack on the Turks from the east, supported by an artillery battery and machine-guns. Mysore Lancers seized the guns on the heights overlooking Haifa and thereby facilitated the charge by Jodhpur Lancers.

A squadron of Mysore Lancers was dispatched up the road to a point four and a half miles east of Haifa for this purpose while another squadron with two machine-guns was ordered to climb up Mount Carmel to deal with the enemy guns located along its crest. The approach into the town had to be made through the narrow defile between mountain and river, and was well covered by Turkish machine-guns and artillery.

Against all odds Haifa town was captured by the Indian cavalry following a daring charge by 400 Indian cavalrymen armed with only lances and swords against 1,500 enemy troops armed with heavy artillery and machineguns. Twenty-five Turkish officers, 664 other ranks, 16 guns and 10 machineguns were captured at Haifa. Forty-four Indian soldiers were killed and 34 wounded. The loss in horses was fairly heavy with 60 killed and 83 wounded. The official history of the war in Egypt and Palestine noted: “No more remarkable cavalry action of its scale was fought in the whole course of the campaign.” About 900 Indian soldiers were interred in cemeteries across Israel in Jerusalem, Ramle and Haifa.

While the capture of the well-fortified town of Haifa was perhaps the most extraordinary feat of cavalry, importantly, it cleared a route for the Allied Forces to the city.

Sadly, the gallant commandant of the Jodhpur Lancers, Maj. Thakur Dalpat Singh, mortally wounded in the charge, did not live to savour the moment of glory. He died the following day and was laid to rest in the shade of an olive grove at Mount Camel. For their outstanding bravery in this battle, Dalpat, Captain Anop Singh and 2nd Lt. Sagat Singh were awarded the Military Cross and Captain Aman Singh Bahadur and Dafadar Jor Singh were awarded the Indian Order of Merit.

The unique and iconic “Teen Murti” war memorial on South Avenue, New Delhi, was erected to commemorate the valour and sacrifices of Indian Army’s 15th Imperial Service Cavalry Brigade Cavalry during World War I in battles fought in Sinai, Palestine, Haifa, the best known one and Syria. The three bronze statues of Indian cavalry soldiers of erstwhile Hyderabad, Mysore and Jodhpur Lancers around a white triangular-based stone obelisk were sculpted by Leonard Jennings. The memorial subsequently got dedicated to commemorate all martyrs of Indian Army’s cavalry and armoured corps in all wars and operations till date.

A brief history of 61 Cavalry

Post-Independence, with the abolishment of princely states in India, it was decided to disband all regular and irregular erstwhile state forces cavalry units and raise a new horse cavalry regiment.

Designated as 61st Cavalry, the regiment was raised in Jaipur in 1953 with Lt. Col. Phulel Singh of J&K state forces as its first commandant. The following cavalry regiments were amalgamated to form 61st Cavalry.

The present class composition of the regiment is Rajput, Maratha and Kaim Khani.