India   All India  15 Oct 2019  Next war will be fought with indigenised weapons, we will win it: Army chief
India, All India

Next war will be fought with indigenised weapons, we will win it: Army chief

Chief said that Defence industry is budding industry and time has now come to look at development of systems for future warfare. 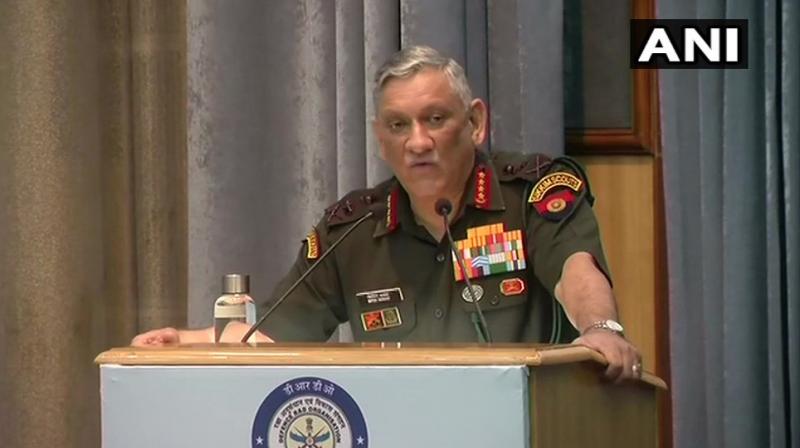 Rawat asserted that along with artificial intelligence, the future lies in the development of cyber, space technology, laser, electronic warfare and robotics. (Photo: ANI)

New Delhi: Army Chief General Bipin Rawat on Tuesday said the Defence Research and Development Organisation has made strides in ensuring that requirement of the country's defence services are met through home-grown solutions, adding that the next war will be fought and won through indigenised weapons systems and equipment.

Speaking at the 41st DRDO Directors Conference, Rawat said: "The DRDO has made strides in ensuring that requirements of the services are met through home-grown solutions. We are confident that we will fight and win the next war through indigenised weapons systems and equipment."

With a network of 52 laboratories, the government agency DRDO is charged with the military's research and development covering various fields like aeronautics, land combat engineering, armaments, electronics, missiles, and naval systems.

The Army chief said that the Defence industry of India is a budding industry and the time has now come to look at the development of systems for future warfare and start preparing for "non-contact warfare."

Rawat asserted that along with artificial intelligence, the future lies in the development of cyber, space technology, laser, electronic warfare and robotics.

"We are looking at systems for future warfare. We have to start looking at development of cyber, space, laser, electronic and robotic technologies and artificial intelligence," he said.

The Army chief said that if the timeline between the design development and production of any weapon system of equipment is to be reduced then it would be better to embed the service officers along with Research and Development.

Calling for joint research by Army officials and DRDO, he said: "In a joint project, the success and failures will become a joint responsibility and we will not start pointing fingers at each other."

On the occasion, Rawat recalled APJ Abdul Kalam on his birth anniversary stating that the late President had set benchmarks and standards for the Defence Research and Development (R and D) community, which is a challenge for scientists who are now emerging.

"I am quite sure the scientists will live up to those expectations," he said.