India   All India  15 Nov 2016  7 of our soldiers killed in cross-border firing, says Pakistan
India, All India

7 of our soldiers killed in cross-border firing, says Pakistan

General Sharif ordered his troops to “effectively” respond to firing by Indian forces across the LoC. 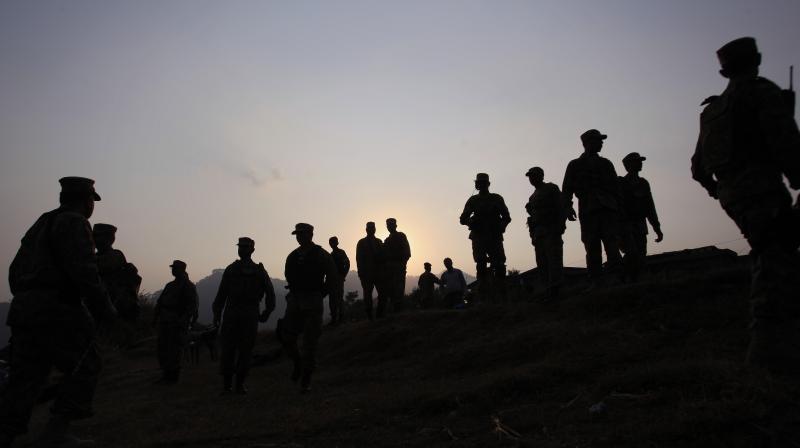 Pakistan army soldiers gather at a forward area post on the Line of Control (LOC), that divides Kashmir between Pakistan and India, in Tatta Pani. (Photo: AP)

Islamabad/Srinagar/New Delhi: In a rare admission of casualties since India carried out surgical strikes against terror camps in Pakistan-occupied Kashmir, the Pakistani Army said on Monday that seven of its soldiers were killed by Indian cross-border shelling overnight Sunday.

“Seven soldiers embraced shahadat at the LoC in the Bhimber sector in a ceasefire violation by Indian troops late last night,” a statement issued in Islamabad by the Inter-Services Public Relations (ISPR) said. It added that Pakistani troops responded to “unprovoked” Indian firing “effectively”, and that the Indian side had suffered “major casualties”.

The Pakistan foreign secretary later summoned the Indian high commissioner and condemned the “unprovoked ceasefire violation” that resulting in the death of seven Pakistani soldiers. He emphasised that this “belligerent attitude” of Indian forces was a serious threat to regional peace and security and a “strategic miscalculation”.

Hours after Pakistan’s statement, the Indian Army and police in Jammu said that an Army jawan was injured as Pakistani troops resorted to heavy unprovoked firing in the Rajouri and Poonch areas along LoC on Monday afternoon. They identified the injured soldier as 9 Para’s commando Vinay Davrai (27), a resident of Uttarakhand.

Intense firing was reported between the Indian and Pakistani troops from different sectors along the LoC and the International Border (IB) in Jammu and Kashmir.

According to news agency reports from Islamabad, Pakistan Prime Minister Nawaz Sharif expressed “profound grief and sorrow” over the loss of precious human lives in the LoC firing, but asserted that his country is “fully capable” of defending its territory against “any aggression”.

Mr Sharif said in a statement that Indian forces are trying to divert attention from the Kashmir issue by creating tension at the LoC. “It is extremely unfortunate that Indian forces have continuously violated ceasefire agreement at LoC, in the recent days… The Indian Forces have resorted to escalating tension on LoC only to detract the world’s attention from the grave human rights situation in Kashmir,” he said.

“There is an indigenous uprising against Indian rule, and the Indian government is failing to read the writing on the wall,” added Pakistani Prime Minister.

Pakistani defence minister Khawaja Asif sought to escalate the provocative rhetoric by saying it was regrettable that “certain extremist elements which had come into power in India could become a source of destruction not only for their own country but the whole region”.

In Jhelum, Pakistan, Army chief Raheel Sharif offered Nimaz-e-Janaza (funeral prayers) for the soldiers after which their bodies were carried to their hometowns.

Later on, General Sharif ordered his troops to “effectively” respond to firing by Indian forces across the LoC. In Srinagar, India, a defence spokesman said that the Army foiled an infiltration bid by militants along the LoC in Nowgam sector of Kashmir Valley’s Kupwara sector on Monday.

The LoC and the IB have witnessed intense clashes between facing troops ever since Indian Army conducted “surgical strikes” across the LoC on September 29, leaving dozens of soldiers, border guards and civilians dead and injured on both sides. Also, thousands of border-dwellers have migrated to safer locations because of escalating tensions and skirmishes.

Earlier on November 10, Pakistan’s foreign secretary had summoned the Indian high commissioner and condemned the continued unprovoked firing that he said was in violation of the 2003 Ceasefire Understanding and the international law.

He observed that indiscriminate firing and shelling from the Indian side deliberately targeting villages and civilians in the area had, in the last two months, resulted in the deaths of 26 people and injuries to 107, including women and children.

The secretary deplored the use of artillery by the Indian forces in Shahkot and Jura sectors on the LoC on November 9, 2016, and said that such weaponry had been used after 13 years, emphasising India’s intention to further escalate tensions.

BULLET FOR THE TURN
The J&K government on Monday announced that nearly 200 schools closed in the borders areas of Poonch, Rajouri, Jammu, Kathua and Samba districts last month will reopen on Tuesday.