The Jullundur Brigade was part of the Indian Corps, which was amongst the earliest to reach the Western Front. 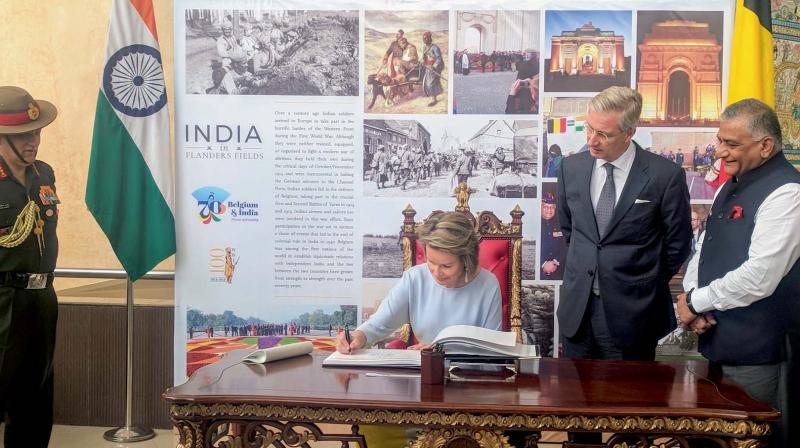 King Philippe and Queen Mathilde of Belgium at Manekshaw Centre for the ‘India in Flanders Fields’ exhibition in New Delhi.

World War I, also referred to as The Great War (1914-1918), ended at 11 am on November 11, 1918 with the signing of the armistice between the Allies and Germany. As a result, there is a two-minute silence held on the 11th hour of the 11th day of the 11th month, to remember those killed in many bloody battles of this war, which was the first one with advanced weapon technology and greater than ever before rates of fatal casualties and collateral damage.

It may not be a well-known fact in India — and not surprising — that close to 1.5 million Indian soldiers under the British, fought in this war and were acknowledged by the armies and people of allied nations on whose soil they fought — to defend those countries — as being the decisive factor to the allied victory. The famous majestic India Gate was built by the British as a memorial to 74,187 Indian soldiers, who were killed in various battles of WWI and all their names are etched on all the walls of this memorial.

2017 is the third year of the four-year-long centenary of WWI. While France and Belgium have always been very appreciative of the role of Indian troops in WWI, in October 2014, the UK conveyed its appreciation of Indian Army’s role in WWI by holding an exhibition and a grand function on the sprawling lawns of the UK high commissioner’s residence, attended by then defence minister Arun Jaitley, the Army Chief, Colonel Commandants of regiments, Indian armed forces veterans and other dignitaries.

The state visit to India of their majesties King Philippe and Queen Mathilde of Belgium from November 5-11, 2017 was timed for them to pay their tributes at India Gate on November 7, 2017 and inaugurate an impressive and informative exhibition named “India in Flanders Fields” on November 8 at Manekshaw Centre, New Delhi, where they released a book with the same title, published by United Service Institution of India’s Centre for Armed Forces Historical Research. Later in the day their majesties departed for Mumbai.

Earlier, from October 26 to November 6, 2017, 12 UK Army veterans of British regiments, which fought alongside Indian regiments of the Jullundur Brigade in Northern France and Flanders during WWI, visited India to pay tributes to Indian soldiers of the Brigade, who fell in various battles.

Referring to fierce battles of 1915, Marshal Ferdinand Foch, commander of the Allied Forces in France during WWI, addressed the troops: “The Indian troops were thus among the first to show the way to a victorious offensive. It is only right that a memorial should perpetuate the glorious memory of officers, non-commissioned officers, and men of the Indian Army at the very spot where later on a general attack by the Allied troops was to bring the decisive victory in sight.” Turning to the Indian contingent, he said: “Return to your homes in the distant, sun bathed East and proclaim how your countrymen drenched with their blood the cold northern land of France and Flanders, how they delivered it by their ardent spirit from the firm grip of a determined enemy; tell all India that we shall watch over their graves with the devotion due to all our dead. We shall cherish above all the memory of their example. They showed us the way, they made the first steps towards the final victory.”

The “India in Flanders Fields” exhibition at Manekshaw Centre showcased apart from the valour and sacrifices of the Indian soldiers, how they travelled overseas for the first time, how they acclimatised and adjusted themselves there. The thousands of Indian soldiers of various communities and religions overcame their handicaps of language and cultures and despite the extremely trying conditions of very cold climate and mucky terrain riddled with rain-drenched trenches, turned the tide of the war and also endeared themselves to the local populace wherever they fought.

Indian bravery finally got acknowledged like never before by the British, who decided to bestow the coveted highest gallantry award in war — the Victoria Cross — to Sepoy Khudadad Khan. That set a precedent and 11 more Indian soldiers were awarded the Victoria Cross in that war.

One of the Indian Cavalry regiments that won almost all the battle honours of WWI’s Western Theatre and beyond till Palestine is Hodson’s Horse, also known as 4th Horse. It was awarded battle honours France and Flanders 1914-18, Givenchy 1914, Somme 1916, Bazentin, Flers-Courcelette, Cambrai 1917, Khan Baghdadi, Mesopotamia 1916-18, Megiddo 1918, Sharon, Damascus and Palestine 1918. It was in Cambrai towards end November 1917 that the regiment fought its toughest action. Despite coming under heavy fire with the forward troops bearing the brunt of it and a high toll of fatal casualties, the regiment won the battle. It is also noteworthy that the regiment’s medical officer Capt. Som Dutt treated an enemy German officer, who was so overcome that he took off his Iron Cross and presented it to him. The various actions in France and Belgium reinforced the reputation of the regiment as one which delivered despite worst of odds. The Brigade Commander’s comment on Hoson’s Horse was “They will reach the objective anyhow”. There was special mention of this regiment at the “India in Flanders Fields” exhibition.

On October 30, 2017, Maj. Gen. Peter Davies, president of the Jullundur Brigade Association (JBA) and heading the delegation of 12 officers visiting India, Lt. Gen. Devraj Singh, former director-general, infantry and colonel of the Sikh Regiment, serving and retired personnel of Indian Army attended a wreath laying ceremony at India Gate. This delegation also visited Jalandhar, as it is spelt and pronounced today, Amritsar, Chandigarh and Shimla. In Amritsar, they paid their respects at the Golden Temple and then visited Jallianwala Bagh, as a gesture of atonement for the massacre there on April 13, 1919. In Chandigarh, they were hosted by Punjab chief minister Capt. Amarinder Singh, a veteran of the Sikh Regiment, along with some serving officers of the regiment.

The Jullundur Brigade was part of the Indian Corps, which was amongst the earliest to reach the Western Front. The very first Indian troops to land on the continent of Europe in September 1914 were the XV Sikhs, later named 2nd Royal Battalion, Sikh Regiment and initially part of the Jullundur Brigade. The Jullundur Brigade went to war in late October 1914 and fought the first battle of Ypres, Neuve Chapelle, Givenchy, capture of Neuve Chapelle, the second battle of Ypres, Festubert and the Loos offensive. In December 1915, after about 15 months in Europe, the Indian Corps was moved to Mesopotamia, where the Jullundur Brigade pitched into action against the Turkish Army and fought there throughout 1916 and 1917. In 1918 they were transferred to Palestine to take part in Allenby’s final offensive.

The original three battalions of the Jullundur Brigade served together for some seven years and the great friendship and liaison, which existed between these three formations, contributed largely to the magnificent reputation gained by the brigade in war and peace. Seventy-five years after the first battle of Neuve Chapelle, the JBA was founded in Manchester, in 1989 by late Maj. Gen. Mohindar Singh Chopra. His son, Pushpinder Singh Chopra, based in Delhi and editor of Vayu magazine, is the vice-president.

If WWI established the reputation of Indian soldiers as diehard professionals — tough, disciplined, very brave and yet stoic — WWII, in which there were almost 2.5 million Indian armed forces personnel, only enhanced that reputation.