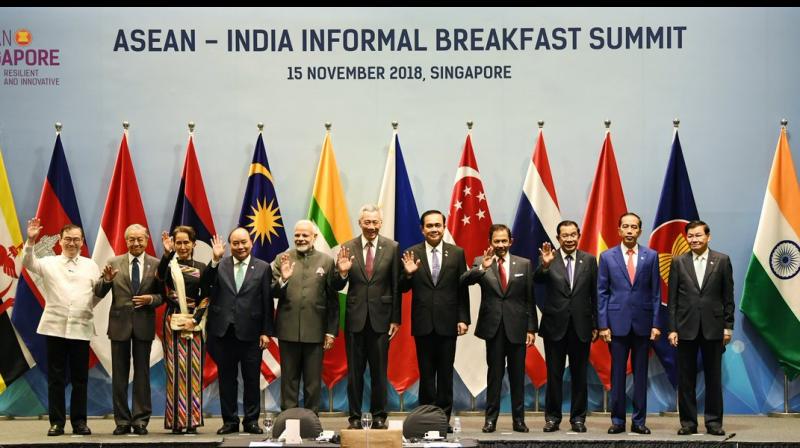 Singapore/New Delhi: Prime Minister Narendra Modi on Thursday participated in the ASEAN-India Breakfast Summit in Singapore and underlined the need for maritime cooperation and centrality of trade for the prosperity of the strategic Indo-Pacific region.

PM Modi began his two-day visit to Singapore on Wednesday by delivering his keynote address at the prestigious Fintech Festival. He also held separate bilateral meetings with the premiers of Singapore, Australia and Thailand and discussed ways to further strengthen ties, including in areas of trade, defence and security.

"Had a great interaction with ASEAN leaders at the ASEAN-India Informal Breakfast Summit. We are happy that ties with ASEAN are strong and are contributing to a peaceful and prosperous planet," PM Modi said in a tweet.

The Indo-Pacific region also came up during the discussion on Wednesday between Prime Minister Modi and US Vice President Mike Pence.

PM Modi referred to his June speech in Singapore at IISS Shangrila Dialogue in which he had outlined India's vision on Indo-Pacific. He conveyed to Pence that his vision of Indo-Pacific was gaining acceptability and that "we should utilise the forthcoming East Asia summit to further build on that".

Pence spoke of a free and open Indo-Pacific. He felt that India's contribution in ensuring this would be important. He said the recent naval exercises held by the US, India and Japan were an "evidence of our commitment to ensuring free and open access to the seas all across this region".

Before leaving for Singapore, PM Modi said in New Delhi that his participation in the ASEAN-India and East Asia summits symbolised India's "continued commitment" to strengthen its engagement with ASEAN members and with the wider Indo-Pacific region.

The Prime Minister also said he was confident that his visit to Singapore would impart fresh momentum to New Delhi's growing partnership with ASEAN and East Asia Summit nations.