Telangana gets its first 'child-friendly' police station at Hyderabad's Medipally

D Ishan, a seven-year-old survivor of a lifetime disease inaugurated the Child- Friendly Police station along with Bhagwat. 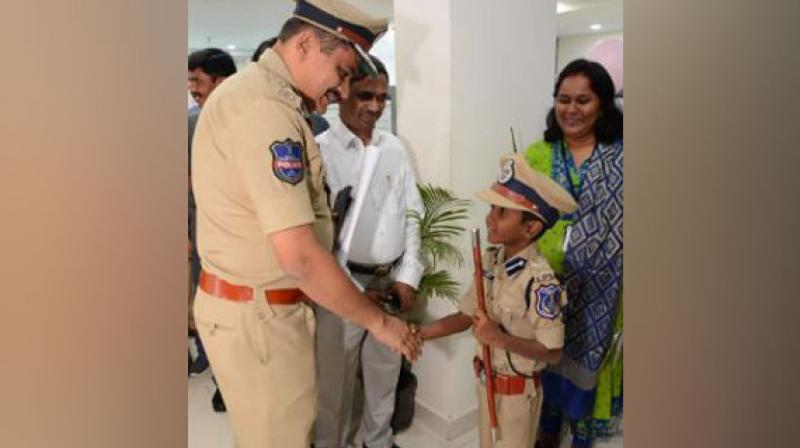 The IPS officer, Mahesh Bhagwat, Commissioner Rachakonda was the chief guest for the program. (Photo: ANI)

Hyderabad: Telangana's first 'child-friendly' police station was inaugurated on Thursday at the Rachakonda Medipally station by D Ishan, a 7-year-old boy who had wished to become the Police Commissioner for a day.

The IPS officer, Mahesh Bhagwat, Commissioner Rachakonda was the chief guest for the program.

D Ishan, a seven-year-old survivor of a lifetime disease inaugurated the Child- Friendly Police station along with Bhagwat.

The initiative was conducted by Bachpan Bachao Andolan (BBA), in collaboration with the Rachakonda Police Commissionerate with the aim to ensure a child-friendly environment where all children are freed from mistreatment, abuse and exploitation.

Samir Mathur, CEO BBA, said, "We applaud this initiative undertaken by the Telangana Police department. Child-friendly police stations play a vital role in ensuring that every child has proper and timely access to justice. These police stations promise a facilitating environment and also encourage higher reporting of crimes relating to children."

"We are pleased to partner with the Telangana Government and hope that our strong alliance will be conducive in bringing justice to children in the state," he added.

The inauguration ceremony organised to formally handover the Child-Friendly Police Station to the authorities by BBA, witnessed participation of over 200 students from nearby schools, and personnel of the State's police department, State Commission for the Protection of Child Rights (SCPCR), Child Welfare Committee (CWC), District Child Protection Unit (DCPU) and District Legal Service Authority (DLSA).

According to the National Crime Records Bureau (NCRB) data, the state has witnessed a 43 per cent increase in cases reported under POCSO during the period of 2016 to 2017.

As part of the joint initiative, BBA will also organise a training session in order raise awareness, sensitise and inform police personnel on the guidelines laid down by the National Commission for Protection of Child Rights (NCPCR) for establishing child-friendly police stations.

While highlighting the role of Police in child-related issues, the organisation apprised the stakeholders on the importance of ensuring that no procedural provisions are disregarded while dealing with distressed children.

With assistance from BBA, the child-friendly police station was decorated with wall paintings, furnished with beds, water coolers, in order to make children who visited the police station, feel comfortable and relaxed.

In addition to this several books, toys and games have also been made available in the rooms inside this police in order to make the children less anxious.

In an endeavour to sensitise the kids on the issue of missing children, a separate event was also organised by BBA in collaboration with State Legal Service Authority at Bhavans School, Neeredpet.

As a part of the event, over 4,000 children formed a human chain in solidarity against the menace of missing children in the state and the lack of reporting of such cases. Through the initiative, the children also expressed their gratitude to the police efforts for their unswerving efforts in tracing missing children.