Several others were injured after forces fired live ammunition to quell protesters, stone-pelters during and after encounter. 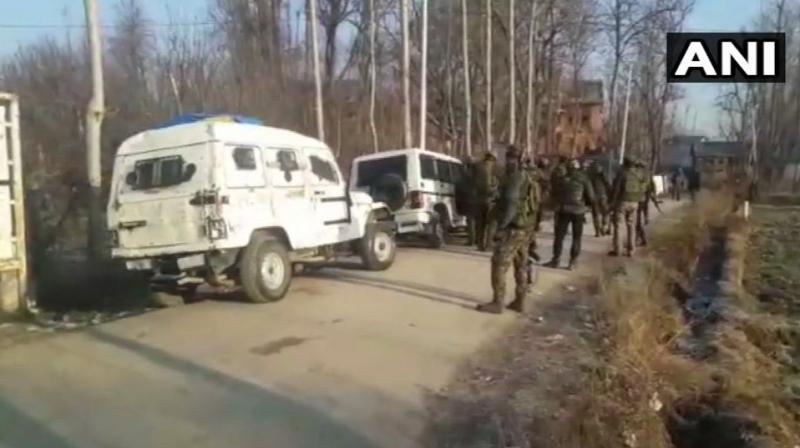 Three terrorists were gunned down in an encounter between militants and security forces in Pulwama's Kharpora Sirnoo village. (Photo: ANI)

The clashes erupted during and after a gunfight between militants and security forces in Pulwama's Kharpora Sirnoo village in which three militants and a soldier died, the police sources said.

The officials said that the gun fight broke out soon after a cordon-and-search operation was launched jointly by the Army’s 55 Rashtriya Rifles, J&K police’s counterinsurgency Special Operations group (SOG) and the Central Reserve Police Force (CRPF)’s 182 and 183 battalions in the village.

They added that the security forces moved into the village after receiving “credible” information about the presence of militants in a private house at Kharpora Sirnoo.

“The terrorists hiding in the area opened fire on the security forces triggering the gun battle in which three terrorists were killed and a soldier was critically injured,” said defence spokesman Colonel Rajesh Kalia.

He added that the injured soldier died in hospital soon after.

Police sources identified the slain militants as Zahoor Ahmed Thokar, Adnan Hamid Bhat and Bilal Ahmed Magray -- all local Kashmiris belonging to Hizb-ul-Mujahideen outfit. Sources said Thokar, a resident of the same village where the encounter took place, was a former soldier who had deserted his Army unit to join militant ranks some time ago.

While the encounter was underway, surging crowds, comprising mainly youth, made repeated attempts to relocate to the site and then clashed with the security forces.

At least, seven people were killed and many others injured when the security forces fired live ammunition to quell the protesters and stone-pelting mob during and after the encounter, reports received here from Pulwama said.

Six of the civilians who died on the spot or on way to hospital have been identified as Shahbaz Ali, Suhail Ahmed, Liaquat Ahmed, Murtaza Ahmed, Amir Ahmed Palla and Abid Hussain Lone. One of the critically injured civilians Rauseef Ahmed Mir has succumbed in Srinagar’s government-run Sri Maharaja Hari Singh (SMHS) Hospital.

Fifteen other seriously injured civilians have been admitted to different hospital of Srinagar.

The situation in entire south Kashmir is very tense and the authorities are contemplating to impose curfew in some towns “as a precautionary measure”. Meanwhile, protests over the Pulwama killings by angry crowds have broken out in some other parts of the Valley including north-western town of Sopore also.

“Another blood-soaked weekend in Kashmir. 6 protestors killed, 1 soldier killed in the line of duty. Together with the 3 militants from this morning’s encounter that’s 10 dead. Reports of many injured at the encounter site. What a horrible day!” Abdullah tweeted.

Peoples’ Democratic Party (PDP) president and former chief minister Mehbooba Mufti also took to micro-blogging site Twitetr.com to condemn the civilian killings. She too criticised the Governor’s administration for “failing to secure civilian lives” and said that no probe could bring back the dead civilians.

She tweeted, “How long are we going to shoulder the coffins of our youngsters? So many civilians killed today post encounter in Pulwama. No country can win a war by killing its own people. I strongly condemn these killings and once again appeal for efforts, to stop this blood bath”.

In another tweet, she said, “No probe enough to bring back the dead innocent civilians. South Kashmir has been reeling under fear for the last 6 months. Is this what was expected from Gov rule? The admin has failed in securing civilian lives. Deepest condolences to the bereaved”.

Separatist leader and Kashmir’s chief Muslim cleric Mirwaiz Umar Farooq called for three day mourning over the killings and also on behalf of ‘Joint Resistance Leadership (JRL)’, the alliance of key separatist leaders including him, asked the people to observe protest shutdown in the Valley for three days from Saturday itself and march on the headquarters of the Army’s 15 Corps at Badami Bagh Cantonment in Srinagar on Monday.

He tweeted, “#PulwamaMassacre. Bullets and pellets rain! As Govt of India has decided to kill Kashmiri’s through its #ArmedForces who control us, JRL and people will march towards Badami Bagh Army cantonment on Monday 17 Dec to ask GOI to kill all of us at one time rather than killing us daily.”

In another tweet, he said, “SOS #to all humanity! Kashmiri’s being massacred as Indian forces go on a killing spree in #Pulwama firing indiscriminately! civilian death toll has crossed 7, more than 40 youth have been hit with Bullets many critical, death toll may rise!” Calling for three days mourning and protest strike, he said, “From today onwards for three days mourning and complete protest strike will be observed all across”.

Police sources said two soldiers were injured in the encounter with the militants. Most of the civilian casualties took place when the Army men on board a Casspir vehicle opened fire to quell an unruly mob which had surrounded it and hurled stoned at it, a police official who spoke on condition of anonymity said.

He said, "While the Army personnel were leaving the village on completion of the operation against militants one of their vehicles, a Casspir, got stuck in mud. A mob quickly surrounded it and started attacking it with stones. The troops on board responded by opening fire, killing and injuring the civilians."