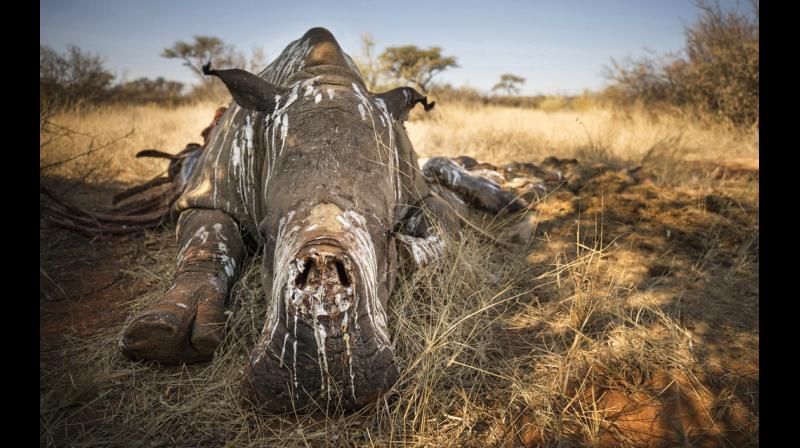 The first case of rhino poaching this year happened at Daflang camp area of KNP's Bagori Range on January 14, but the poachers could not take away its horn. (Photo: AP / Representational Image)

Kaziranga: The carcass of an adult male rhino with its horn removed was spotted by a tourist group at Kaziranga National Park (KNP) in upper Assam on Saturday, a senior forest department official said.

The tourist group spotted the carcass at the Bhulukajan forest camp area under the Bagori range in KNP, he added.

Following the recovery, the number of rhinos killed this year rose to six.

According to Divisional Forest Officer (DFO) of KNP, Rohoni Ballav Saikia, the visitors spotted the carcass of the pachyderm on the tourist route to Bagori range, while they were visiting the World Heritage Site in a jeep safari.

Gunshots were heard on Friday night but were thought to be sounds of firecrackers from a marriage nearby, Saikia said.

Earlier on May 11, a bullet-riddled carcass of another adult male rhino with its horn missing was recovered from Chirakhowa anti-poaching camp area near the banks of the Brahmaputra river.

On March 3, a female adult rhino was killed outside the KNP area at Lohore Chapori in the state's Majuli district. Its horn was also taken away by poachers.

Another rhino was killed at Polokata Tapu near Sitamari under the jurisdiction of Lahorijan forest camp on the midnight of February 11.

The first case of rhino poaching this year happened at Daflang camp area of KNP's Bagori Range on January 14, but the poachers could not take away its horn.