The verdict also came as a breather for Anil Ambani-led Reliance Group that has come under attack from the Congress for alleged wrongdoings. 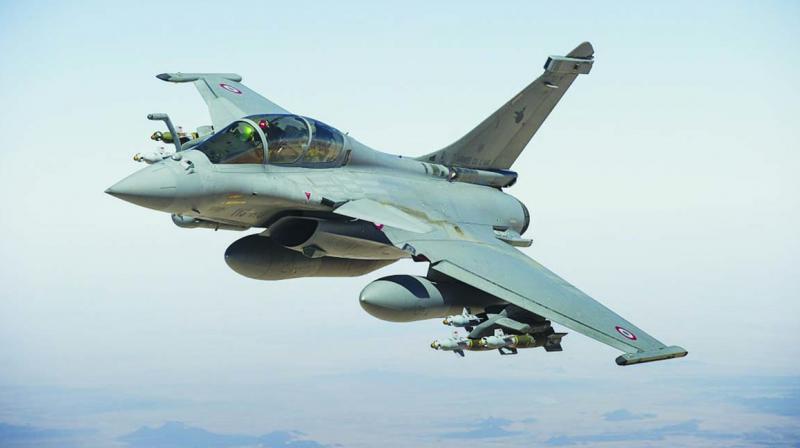 The apex court rejected the pleas which sought lodging of an FIR and a court-monitored probe alleging irregularities in the deal, in which both India and France have entered into an inter-governmental agreement (IGA).

New Delhi: In a major relief to the Narendra Modi government, the Supreme Court on Friday said it was “satisfied” with the decision making process in concluding the Rafale fighter jet deal and rejected all four petitions seeking an investigation into alleged irregularities in the Rs 58,000 crore deal, sparking bitter exchanges between the BJP and the Congress.

A bench, headed by Chief Justice Ranjan Gogoi, said, “We find no reason for any intervention by this court on the sensitive issue of purchase of 36 defence aircrafts by the Indian government.”

“We are satisfied that there is no occasion to really doubt the process, and even if minor deviations have occurred, that would not result in either setting aside the contract or requiring a detailed scrutiny by the court,” said the bench, also comprising Justices S.K. Kaul and K.M. Joseph, in its 29-page judgment.

After dealing with “three broad areas of concern” raised in the petitions — the decision ­making process, pricing and the choice of Indian offset partners (IOP) — the court said, “Individual perceptions cannot be the basis of a roving judicial review... The court cannot sit as an appellate authority over each and every aspect of the deal.”

The apex court rejected the pleas which sought lodging of an FIR and a court-monitored probe alleging irregularities in the deal, in which both India and France have entered into an inter-governmental agreement (IGA).

The verdict also came as a breather for Anil Ambani-led Reliance Group that has come under attack from the Congress for alleged wrongdoings.

“We do not find any substantial material on record to show that this is a case of commercial favouritism to any party by the Indian government,” the court said, giving a virtual clean chit to the company that is one of the offset partners of French aerospace company Dassault Aviation that is making the Rafale twin-engine Medium Multi Role Combat Aircraft (MMRCA) for the Indian Air Force.

The apex court verdict giving a go-ahead to purchase of 36 jets from France came as a political victory for the BJP and Mr Modi just days after the party’s defeat in Assembly polls in three Hindi-heartland states — Madhya Pradesh, Rajasthan and Chhattisgarh — to the Congress.

The BJP leaders, who had all gone quiet after the electoral rout, were back in action after the Supreme Court’s verdict with the party chief, Amit Shah, losing no time to hold the first press meet in last three days.

“Rahul Gandhi should apologise that he tried to create suspicions in the mind of the soldiers and people... He has attempted to jeopardise the nation’s security,” said Mr Shah.

Accusing Mr Gandhi of misleading people and endangering national security by raising questions on the Rafale deal at every meeting, the BJP chief asked him to disclose the source of information on which he had based his claims.

Calling the verdict a slap on the face of those who have levelled false charges on the government, Mr Shah also targeted the unity among Opposition parties in attacking the Narendra Modi government.

He said all “thieves” had joined hands in dubbing the “chowkidar” (watchman), a reference to Mr Modi, a thief. But the court verdict has made it clear that they are scared of the “chowkidar”, he added.

Challenging the Supreme Court’s virtual clean-chit to the government on the deal, Congress president Rahul Gandhi raised questions about the judgment referring to a Comptroller and Auditor General (CAG) report on the pricing of the 36 Rafale jets.

Mr Gandhi also reiterated the Congress’ demand for a Joint Parliamentary Committee (JPC) probe into the fighter jet deal and claimed that if it was conducted, names of Mr Modi and Mr Ambani will come to the fore.

Mr Gandhi said though the apex court had said that the auditor’s report had been examined by the parliamentary Public Accounts Committee (PAC) and was in the public domain, no one, including senior Congress leader Mallikarjun Kharge who heads the PAC, has seen it.

Prashant Bhushan, one of the petitioners who had moved the Supreme court with a plea for a direction to the CBI to register an FIR for alleged irregularities in the Rafale deal, termed the top court’s judgment “wrong”.

“In our opinion the Supreme Court judgment is totally wrong, the campaign will certainly not drop and we will decide if we will file a review petition,” said Mr Bhushan.

After the three petitions were filed in the Supreme Court, former Union ministers Yashwant Sinha and Arun Shourie, alongwith activist advocate Mr Bhushan, had moved the apex court with a fourth petition over the deal.

Ruling out a JPC over the jet deal, finance minister Arun Jaitley dubbed allegations on wrongdoings in the defence purchase as “fiction writing” that compromised national security.

“The deaf will never hear an answer… all the figures by Rahul Gandhi are false and I have justified it... The truth has only one version and falsehood has many,” Mr Jaitley said, adding that if honest deals are questioned, then civil servants and the armed forces will think twice before undertaking such a process in future.

Mr Jaitley said that the government would again press for a debate on the issue in Parliament. Buoyed by the verdict, defence minister Nirmala Sitharaman, who addressed a press conference along with Mr Jaitley, said that the matter of Rafale deal has been put to rest by the apex court.

Union law minister and senior BJP leader Ravi Shankar Prasad launched a counter-attack on Mr Gandhi, saying the apex court had “exposed his lies” which he has been using to attack the “honest and popular” Prime Minister.

Mr Prasad said Mr Gandhi’s problem is his arrogance and conceit about his dynasty.

Union home minister Rajnath Singh said Mr Gandhi had tried to mislead people on Rafale deal for political benefit and maligned India’s image globally. Mr Singh said that the Congress president should apologise to the people of the country.

Welcoming the apex court’s order, Uttar Pradesh chief minister Yogi Adityanath demanded an unconditional apology from the Congress for spreading “false propaganda” against the BJP and the Central government.

Reliance Group chairman Anil Ambani welcomed the Supreme Court order on the  Rafale jet deal, saying it has established the falsity of politically motivated allegations against his firm.

“I welcome the judgment of the Supreme Court today summarily dismissing all PILs filed on the Rafale contracts, and conclusively establishing the complete falsity of the wild, baseless and politically motivated allegations levelled against Reliance Group and me personally,” Mr Ambani said in a statement.

Referring to both the Congress and the BJP as “ek hi thali ke chatte batte (birds of a feather)”, BSP supremo Mayawati called for fundamental reforms in all defence related procurements in order to address doubts and common perception over such issues.

In a statement, Ms Mayawati said that there is a need for basic changes at the level of the government in matters of defence-related deals.