Assam’s districts like Tinsukia, Dibrugarh and Jorhat remained tense with report of some violent protests pouring in. 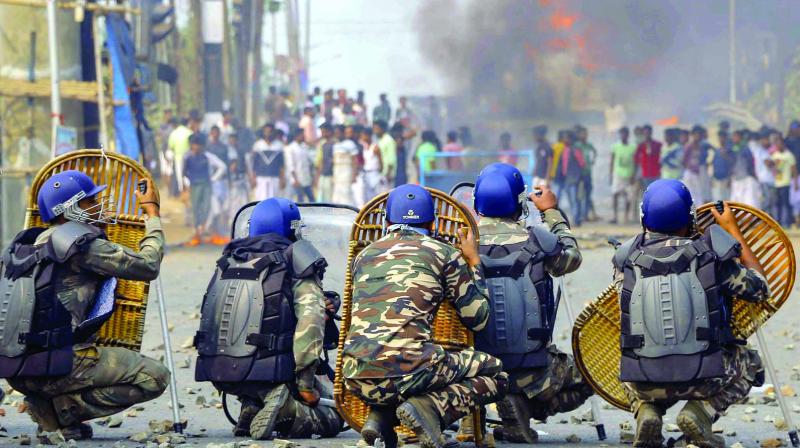 Police jawans try to protect themselves as protesters throw stones on them during an agitation against the Citizenship Amendment Bill (CAB) at Santragachi in Howrah district of West Bengal on Saturday. (Photo: PTI)

Kolkata/Guwahati: Violent protests against the amended Citizenship Act rocked West Bengal for the second consecutive day on Saturday even as the situation in Guwahati, which witnessed a series of violent protests over the last three days, has begun to limp back to normal on Saturday. However, after relaxing curfew for seven hours in Guwahati, authorities re-clamped it at about 4 pm.

Assam’s districts like Tinsukia, Dibrugarh and Jorhat remained tense with report of some violent protests pouring in.

In West Bengal, protesters set fire to a number of trains, railway stations and buses and damaged public property. The protestors mostly targeted railway properties and Murshidabad and Howrah districts bore the brunt of their ire.

Chief minister Mamata Banerjee, who has resolutely opposed the Citizenship Act, appealed for peace, while the Opposition BJP threatened to move the Centre for imposition of President’s Rule if the “mayhem by Bangladeshi Muslim infiltrators continued.”

They ransacked Sankrail railway station in Howrah district, torched its ticket counter and damaged the signalling system. “When RPF and railway personnel tried to stop them, they were beaten up,” a senior Railway Protection Force official said.

In Domjur and Bagnan in Howrah, protestors rampaged outside the stations, blocked roads and set fire to shops.

The NH6 was blocked in Domjur by protesters who burnt tyres and ransacked several vehicles, a police official said.

A huge police contingent has been rushed to the spot to control the situation, they said.

A toll plaza was set ablaze in Murshidabad and passengers were forcibly deboarded from a bus at Suti in the district. Tyres were burnt on the roads at Margram in Birbhum.

The protests affected movement of trains in South Eastern Railways and in Howrah and Sealdah sections. The agitators staged sit-ins on the tracks at Shondaliya and Kakra Mirzapur stations on the Sealdah-Hasnabad section since 6.25 am. While the one at the Shondaliya is still on, the blcokade at Kakra Mirzapur was withdrawn at 9.30 am, a Railway spokesperson said.

Train services came to a halt in Howrah-Kharagpur section of the South Eastern Railway since 11 am as protesters sat on the tracks at Sankrail, Nalpur, Mourigram and Bakranawabaz stations, said its zonal spokesperson Sanjoy Ghosh.

Twenty trains, including eight express trains, have been stopped at various stations in the South Eastern zone, a railway official said, adding several trains have also been cancelled in the stretch.

Around 25 private and public buses were torched by angry protestors on the arterial Kona Expressway which provides connectivity to NH2 (Delhi Road) and NH6 (Mumbai Road) while a number of buses were set ablaze in Malda and Murshidabad districts.

National Highway 34, one of the arterial roads that connects north and south Bengal, was blocked in Murshidabad. Several other roads in the district were also blocked, they said.

Police resorted to lathicharge in some areas of Murshidabad district to control the protestors, officials said.

Ms Banerjee on Saturday appealed to people to maintain calm and protest democratically and not to damage government properties.

“Do not take up law in your hand. Do not put up road blockades and rail blockades and create trouble for the common people on the roads,” Ms Banerjee said in a statement released from the chief minister’s office.

“Do not cause damage to government properties. Strict action would be taken against those who are found guilty in creating disturbances,” the statement said.

“Strict action would be taken against those who are found guilty in creating disturbances and for taking law in their hands,” a CMO statement quoting her as saying.

West Bengal governor Jagdeep Dhankhar, who is in conflict with Ms Banerjee and the TMC government, tweeted, “Distressed and pained at events unfolding in the State. Chief minister as per oath has to bear true faith and allegiance to the Constitution of India, and I as Governor will to the best of my ability preserve, protect and defend the Constitution and the law”.