End the ‘fee’fdom: Medical college fees to be slashed?

About half the total number of available MBBS seats are government-owned and charge nominal fees. 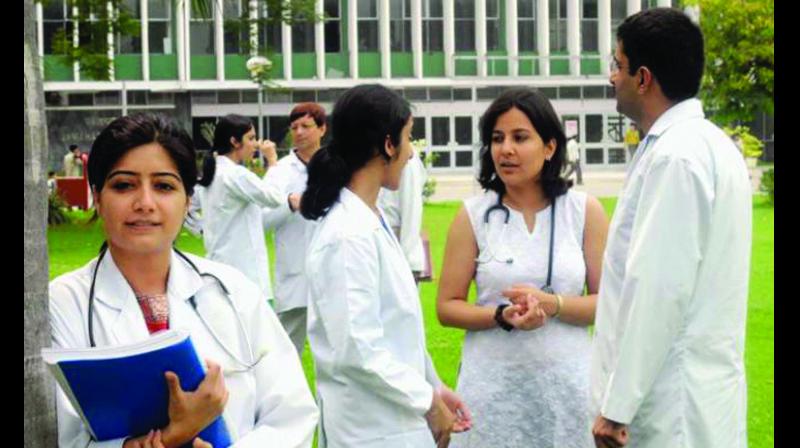 Medical student aspirants can rejoice, for getting an MBBS degree will become upto 90 percent cheaper from the next academic year, going by directions from the Union Ministry of Health.

Studying medicine in India is prohibitively expensive, save for those who make it into the coveted merit quota and the lucky few who can afford the management quota fee. Undergraduate courses can set a student back by between Rs 25 lakh and Rs 70 lakh, while a postgraduate course can cost up to Rs 3 crore. Presently, state governments can decide fee structures, in the absence of clear regulations. The Union ministry of health and family welfare, however, has planned to slash fees by between 70 and 90 per cent for undergraduate and postgraduate courses respectively, from the next academic year and has put the Board of Governors, constituted in place of the Medical Council of India, on the task. Experts say this could give more room to merit students, check rampant ‘seat blocking’ and ease the shortage of doctors in India. Ramesh S Kebbehundi reports

Medical student aspirants can rejoice, for getting an MBBS degree will become upto 90 percent cheaper from the next academic year, going by directions from the Union Ministry of Health.

If all goes well, the fee could be reduced by a whopping 70 percent for UG seats and 90 percent for postgraduate seats next year. Fees for around 50 percent of MBBS seats in private medical colleges will range between Rs 6 lakh to Rs 10 lakh if the draft guidelines are accepted by the institutions. About half the total number of available MBBS seats are government-owned and charge nominal fees. If the fee regulation draft is brought to fruition, 50 percent of the remainder will see a huge slash in fee. This means 75% of the total available seats in the country will be made affordable. The fee for the remaining 25 percent of the management quota seats in private colleges and deemed to be universities can still be regulated by the states, on the basis of MoUs signed with individual institutions.

The Board of Governors, which has been vested with the powers of the Medical Council of India (which was dissolved in 2018), has been asked to prepare draft guidelines for the fee structure in private medical colleges and deemed universities from the next academic year. About 50 percent of the total MBBS seats in private colleges will be subject to a fee reduction.

No fee structure regulations:
So far, private colleges have not been restricted in terms of fixing fees, due to flaws in the regulating laws. Different states have their own regulations for fixing fee structures. The steady increase in the cost of medical education has become a cause for concern for the government, as it could lead to unethical medical practices in the nation.

As per official data from the MCI, there are a total of 539 colleges teaching MBBS courses in India and about 76,928 seats. 41,388 of these are government seats and can be obtained through NEET scores.

The Indian Medical Council Act of 1956, had had no provision for the regulation of fees in private medical colleges. At present, some states regulate the fees of some seats in private colleges through MoUs signed with college managements. In addition, the Supreme Court has set up  committees chaired by retired High Court judges to fix fees in private colleges as an interim measure. Deemed-to-be universities are not covered by these committees.