JNU has been seeing protests for one-and-a-half months over the increase in fee and students have boycotted exams over the issue. 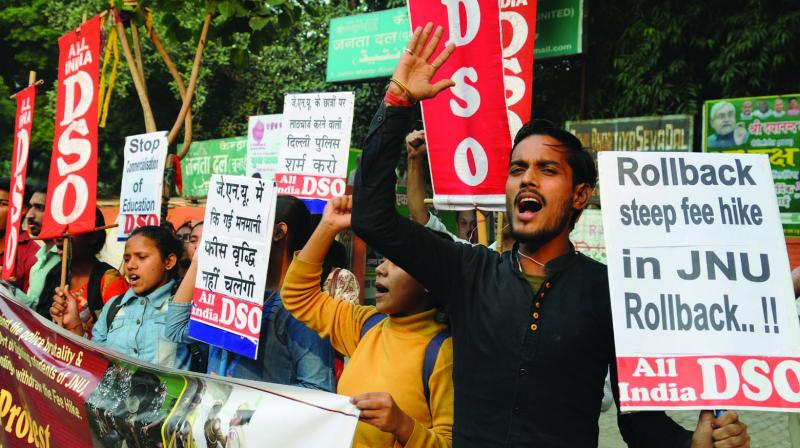 JNU Vice-Chancellor Mamidala Jagadesh Kumar on Saturday claimed that a group of 15-20 students surrounded him "in a violent manner" on the campus and abused and tried to attack him but the university security staff and police personnel rescued him. (Photo: File)

New Delhi: JNU Vice-Chancellor Mamidala Jagadesh Kumar on Saturday claimed that a group of 15-20 students surrounded him "in a violent manner" on the campus and abused and tried to attack him but the university security staff and police personnel rescued him.

However, the Jawaharlal Nehru University Students' Union said the VC ran way when the students confronted him with questions on hike in hostel fees and accused him of spreading falsehood.

JNU has been seeing protests for one-and-a-half months over the increase in fee and students have boycotted exams over the issue. The protests had turned violent once, forcing the administration to roll back the hike partially, but the students say they want a complete rollback.

Thereafter, they went to the School of Arts and Aesthetics. "When we were coming back, 15-20 students in a violent manner surrounded me with an intention to physically assault me. They were planning to attack me and were very abusive," he told PTI.

He said he was rescued by security guards and policemen in civil clothes who tried to take him away in a security vehicle but the crowd did not allow it. "I  got off the vehicle and moved ahead of the crowd by 20-30 metres," Kumar said. "And then I got into my car. They damaged the car and didn't allow the car to move. My driver's presence of mind helped and he reversed the car and rescued me."

After he left, Kumar said, the students entered the administration block and ransacked it in violation of the Delhi High Court order which prohibits protests within 100 metres of the building. He said the security personnel will be able to recognise the students as photos and videos were available.

When asked about the possibility of disciplinary action against the students, he said proceedings would be started against them and he will also be filing a police complaint. Earlier this week, the court had asked police to ensure security when the vice-chancellor and other officials entered the administration block, which the students had been occupying for over a month.

Countering Kumar's charge, JNUSU said the vice chancellor, "who does not hold any dialogue with the students", this evening visited the School of Arts and Aesthetics and students questioned him about the fee hike. "Instead of answering questions, he ran away from the spot. It is shameful that not only while leaving, his car tried to run over a student, whilst injuring other students near his car, but after going back he is telling complete lies and falsehood," the students' body said in a statement.

They accused the VC of calling police in large numbers and transforming the administration block into a police camp. The JNUSU urged the VC to have a dialogue with them. But the VC said he held a meeting with hostel presidents and student leaders, and claimed that students were more or less convinced with the hostel charges and they's no longer any issue.

"The students (who attacked me) have some other motives. There is a small group of students who are trying to damage the future of innocent students who want to give exams. They have crossed all levels of civility," he said.

The JNU Teachers' Federation, a group of teachers that has broken away from JNUTA, called the alleged attack on VC and other officials "condemnable and horrifying".

"Needless to add, every section of JNU community has every right to protest but within the rules and norms of democratic principles," they said in a statement. JNUTF demanded an immediate enquiry and severe action against the perpetrators.