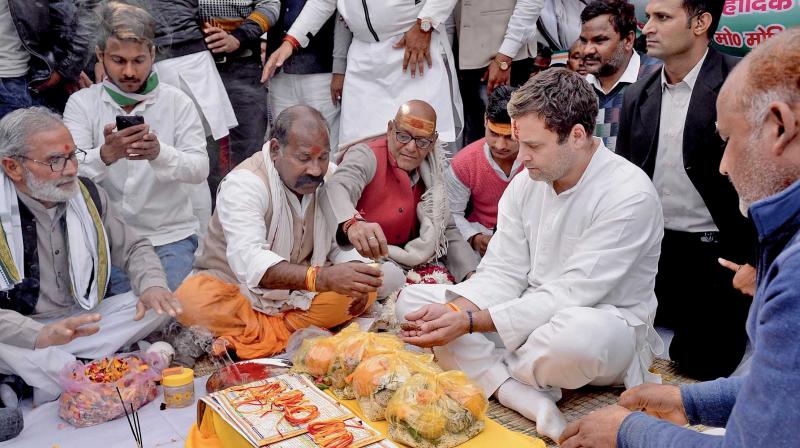 Lucknow: Congress president Rahul Gandhi began his first visit to Amethi after becoming party chief on Monday with a temple visit — a clear indication that the Congress will continue with its “soft Hindutva” agenda. Posters depicting him as Lord Ram and Prime Minister Narendra Modi as Ravan appeared in Amethi, which led to a major controversy.

Mr Gandhi chose to visit the local Churwa Hanuman temple in Rae Bareli as BJP workers staged protests over his visit and clashed with Congress workers in Salon Assembly segment. The police had to intervene to restore order in the area.

Mr Gandhi, in an informal speech later, accused the BJP of lying continuously and also depriving Amethi of its development projects. “The BJP leaders are lying continuously. There is one lie after another. They have lied to every section of people — whether it is putting Rs 15 lakhs in bank accounts or giving a better deal to farmers or giving jobs to the youth”, he said, adding that young people were jobless, but Prime Minister Narendra Modi never uttered a word about them.

Mr Gandhi asked Congress workers to “expose the lies” of the BJP. He said: “Every Congress worker must tell the people about the lies of the BJP. These people are also misleading the people of Amethi and we have to tell them about the development work done by us. In fact, the Modi government has tried to undo all that we did for Amethi. The government has taken away some of our projects.”

UP chief minister Yogi Adityanath, on the other hand, advised Mr Gandhi to stop indulging in negative politics and focus on development. “Look at the plight of Amethi that has been nursed by four generations of the Nehru-Gandhi family”, the chief minister told reporters in Gorakhpur.

In the posters, Rahul Gandhi can be seen carrying a bow and arrow, pointing towards Narendra Modi. The inscription on the poster states: “Rahul ke roop mein Bhagwan Ram ka avatar 2019 mein aayega Rahul Raj”. The poster was said to have been put up by a local named Abhay Shukla, who claims to have no links with the Congress.

Mr Shukla told reporters: “Prime Minister Modi promised us to bring black money back that is stashed abroad, but nothing happened. All the promises made by him were lies. We believe that in 2019, Rahul Gandhi will become the Prime Minister of the county and fulfil all the promises.”

The district Congress in Amethi has strongly denied having anything to do with the controversial poster.