India   All India  16 Jan 2019  'No respect for Sikhs': Row over Jagdish Tytler's presence at Congress event
India, All India

'No respect for Sikhs': Row over Jagdish Tytler's presence at Congress event

Jagdish Tytler was seen sitting in the front row at event where Sheila Dikshit took over as Delhi Congress chief. 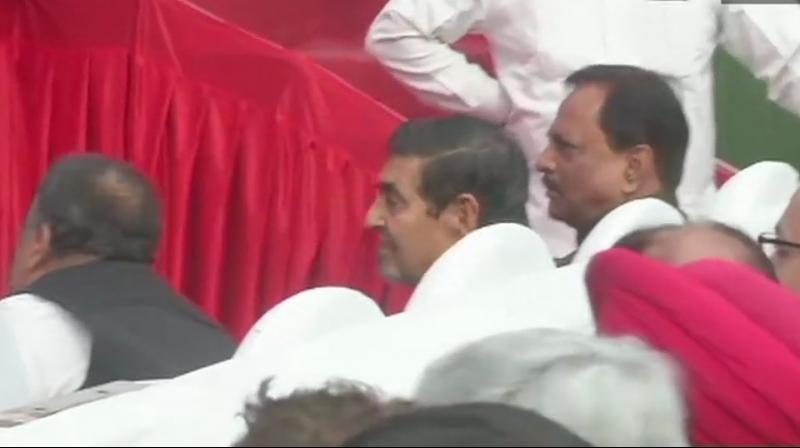 As Jagdish Tytler was seen in the front rows, Akali Dal accused Congress of having 'no respect for sentiments of Sikhs'. (Photo: Twitter | ANI)

New Delhi: The presence of 1984 anti-Sikh riots accused Jagdish Tytler at the event where Sheila Dikshit took over as Delhi Congress chief has kicked off a controversy. As Tytler was seen in the front rows, Akali Dal accused Congress of having “no respect for sentiments of Sikhs”.

Union Minister Harsimrat Kaur Badal, an ally of the ruling BJP, said: “What his family did earlier, Rahul ji is just continuing with that tradition. It clearly shows that they have no respect for sentiments of Sikhs.”

Another Shiromani Akali Dal leader Manjinder Singh Sirsa alleged that the Congress made Tytler sit in the front row to "intimidate" witnesses in related cases. He claimed the Congress is "afraid as it is aware that Tytler and Kamal Nath would also be jailed" in cases related to the anti-Sikh riots.

"The Congress wants to send a message to the witnesses that the party high command supports Tytler and nobody should even try to testify against him," Sirsa alleged.

"Since the conviction of Sajjan Kumar, the party is afraid... that the leaders whom it kept safe are now being jailed. By such acts, it is also sending a message to the judiciary and police that nobody should initiate action against them," he alleged.

Tytler, a former Union minister, was named as one of the main accused of the anti-Sikh riots in the report by the Nanavati Commission into the immediate aftermath of the then prime minister Indira Gandhi’s assassination on October 31, 1984.

He has been a continuous embarrassment for the Congress party as political opponents have alleged that the party is shielding its leaders accused in the anti-Sikh riots.

Last month, another riot-accused leader Sajjan Kumar was sentenced to life in jail by the Delhi High Court, which cancelled an earlier court order setting him free.

Tytler refused to comment on Sajjan Kumar’s conviction and maintained that he had nothing to with the riots.

“What can a man say when the Court has given a verdict. You also mention my name. Why? Is there an FIR? Is there a case? No? Then why do you take my name? Someone said that and you believed it,” he told the reporters.