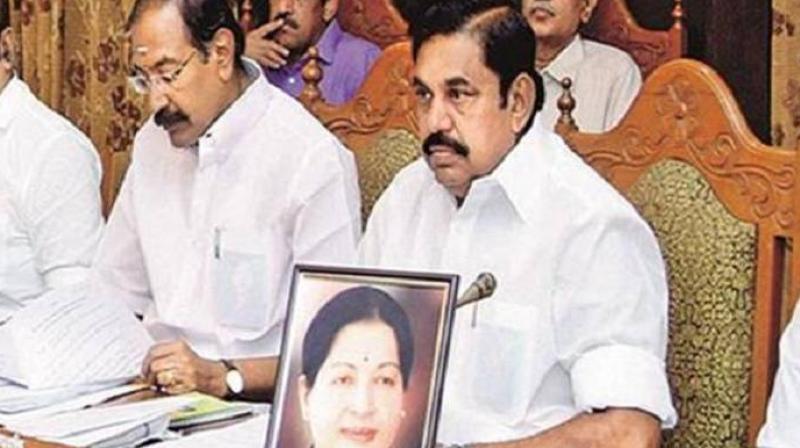 Palanisami is not only a member of the House but was also not disqualified or likely to be disqualified from being a member. (Photo: PTI)

Chennai: Sasikala loyalist Edappadi K Palanisami is all set to be the new Chief Minister of Tamil Nadu with the Governor on Thursday inviting him to form government at the "earliest".

Ending the 10-day impasse over government formation, Governor Ch Vidyasagar Rao asked Palanisami, the AIADMK Legislature Party Leader, to form his ministry at the earliest and seek a vote of confidence in the assembly within 15 days.

Palanisami is reportedly discussing the composition of his cabinet and the confidence vote which he has to seek in the next 15 days, as mandated by Governor Ch Vidyasagar Rao.

"The Governor has today appointed Edappadi K Palanisami, Party Headquarters Secretary of AIADMK as Chief Minister of Tamil Nadu and invited him to form the ministry at the earliest," a Raj Bhavan release said.

The Governor's invitation came "in acceptance" of the letter submitted by Palanisami on February 14, saying he had been elected as the Leader of the AIADMK Legislature party in a meeting of its MLAs that day.

Earlier in the day, the Governor had met Palanisami, the third meeting between the two since February 14 when AIADMK General Secretary V K Sasikala was convicted by the Supreme Court in an assets case, dealing a body blow to her ambition of becoming Chief Minister.

She was earlier elected AIADMK Legislature party leader on February 5, but a revolt by the O Panneerselvam came as a spanner in her works.

Soon after news of Palanisami emerging as the next Chief Minister came in, supporters of Sasikala welcomed his elevation and hailed the Governor's decision.

MLAs staying at the Koovathur resort, about 80 km from Chennai, for the past one week amidst police enquiries of their well-being, were all smiles and also raised slogans, hailing 'Chinnamma' (Sasikala).

Party MPs supporting Sasikala said due process has come into being and that the state government would stay.

Though the Governor held meetings with both the warring factions led by Panneerselvam and Palaniswami respectively during the last two days, he seems to have gone by the constitutional mandate on the support of MLAs' to the Chief

Minister designate, who claims to have the 124 legislators on his side.

Rao was on Monday advised by Attorney General Mukul Rohatgi to convene a special session of the Legislative Assembly within a week for holding a composite floor test.

"We will not let the party (AIADMK) go into the hands of few of V.K Sasikala's family members," Panneerselvam said.