BJP keeps suspense alive, to name UP CM on Saturday

Top contenders for the CM post in the politically crucial state are Rajnath Singh, Manoj Sinha and UP BJP chief Keshav Prasad Maurya. 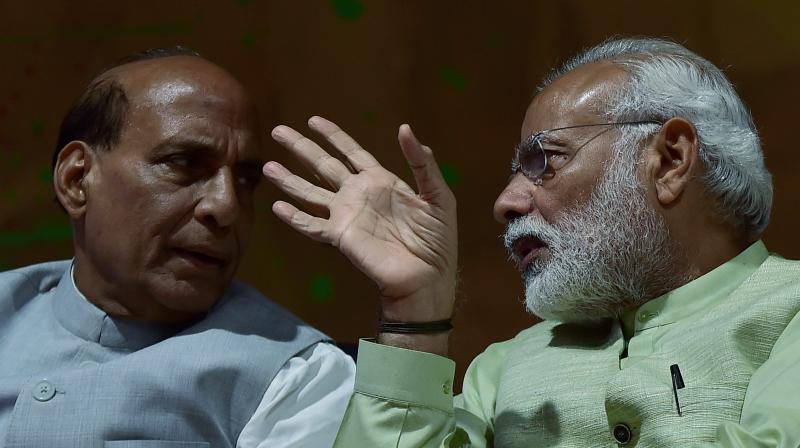 New Delhi: Bharatiya Janata Party (BJP) will finalise the name of its Chief Ministerial candidate for Uttar Pradesh on Saturday, after winning an astonishing 312 of its 403 seats in the Assembly polls.

Though speculation is rife that Union Home Minister Rajnath Singh would get the post, top leaders of the BJP seem unsure about the prospect of sending Rajnath to UP, according to a report in NDTV.

With eyes on the 2019 Lok Sabha elections, Prime Minister Narendra Modi and BJP president Amit Shah are reportedly working towards finalising the nominee for the post of Uttar Pradesh.

As of now, top contenders for the CM post in the politically crucial state are Central Minister for Telecom Manoj Sinha and UP BJP chief Keshav Prasad Maurya.

However, Maurya could be the party’s pick for the post as he comes from a Most Backward Class category, unlike Manoj who belongs to general category. This is because the BJP is purportedly trying to appease Dalit and Backward Class voters.

Moreover, Maurya is close to the Rashtriya Swayamsevak Sangh (RSS) and has been a member.

The BJP is also consulting the RSS on the key decision.

The BJP is however worried that Maurya has a number of cases against him and that it could be targeted by political rivals if it appoints him CM.

Of the five states that went to polls this year, BJP has already formed governments in Goa and Manipur, where its rival Congress had won majority of seats. However, the party has not been able to decide the CM candidate for UP, where they won a record 312 seats in the 403-member Assembly, excluding 13 seats won by allies. The results of the Assembly polls were declared on March 11.