India   All India  16 Mar 2017  Will work on promises made in Cong manifesto from Monday: Amarinder
India, All India

Will work on promises made in Cong manifesto from Monday: Amarinder

Navjot Singh Sidhu, Manpreet Singh Badal and Charanjit Channi were among the other Congress MLAs who took oath as ministers. 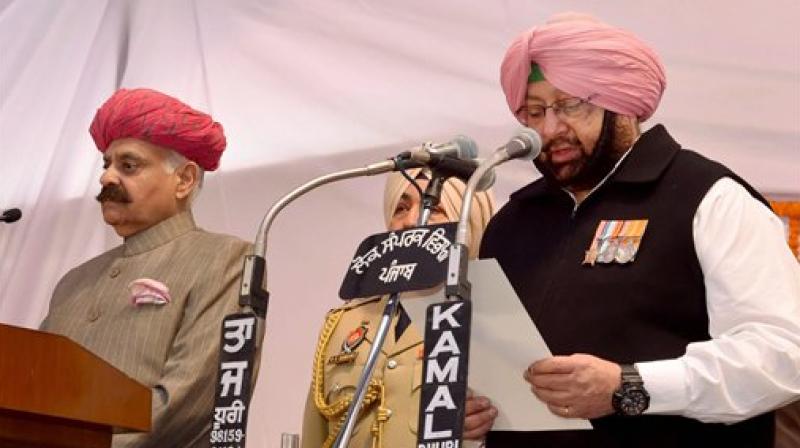 Chandigarh: Captain Amarinder Singh, who today took charge as the Chief Minister, assured to fulfill all the promises made in the Congress manifesto for development of Punjab.

"I will work on programmes mentioned in the manifesto from Monday. I will take up most of the issues in the first Cabinet meeting," he told ANI.

Captain Amarinder, who led the Congress to victory in the state after a decade, was sworn-in as the 29th Chief Minister of Punjab earlier in the day.

Governor V.P. Singh Badnore administered the oath of office and secrecy to Captain and nine members of his Cabinet at the Raj Bhawan here.

Navjot Singh Sidhu, Manpreet Singh Badal and Charanjit Channi were among the other Congress MLAs who took oath as ministers.

Inducted into the Congress by late prime minister Rajiv Gandhi and first elected to the Lok Sabha in 1980, Captain had been campaigning to mark the first state-election victory for the grand old party after the 2014 Lok Sabha debacle.

The Congress secured 77 out of 117 seats in the state assembly polls. The Aam Aadmi Party (AAP) won 20 seats on its debut, emerging as the second largest party in the Punjab Assembly.