Mann had invited the people of the state to attend his swearing-in ceremony, saying the people of Punjab will also take oath with him 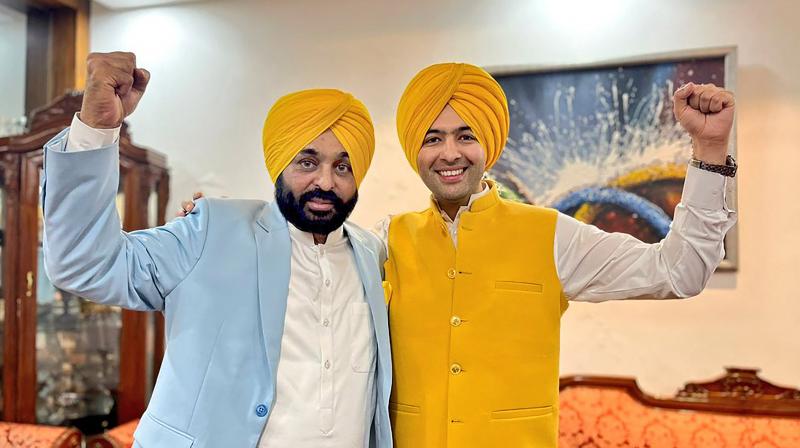 Chandigarh: Ahead of being sworn-in as Punjab chief minister on Wednesday, AAP leader Bhagwant Mann said people of the state will take oath with him to fulfil the dreams of Bhagat Singh and Babasaheb Ambedkar.

All arrangements are in place for the swearing-in ceremony of Mann at Khatkar Kalan, the ancestral village of legendary freedom fighter Bhagat Singh in Punjab's Shaheed Bhagat Singh (SBS) Nagar district.

Mann in a tweet in Punjabi said, The golden rays of sun have brought a new dawn today. To fulfil the dreams of Shaheed Bhagat Singh and Babasaheb (B R Ambedkar), entire Punjab will take oath today at Khatkar Kalan.

In a tweet, Kejriwal said he had left for Khatkar Kalan to witness a historic moment."

"It's a big day for Punjab today. In this golden morning of new hope, the entire Punjab will today come together and take a pledge to make it a prosperous Punjab. To witness the historic moment, I have also left for Khatkar Kalan, the native village of Shaheed Bhagat Singh, Kejriwal tweeted in Hindi.

AAP leader and party's Punjab affairs co-in-charge Raghav Chadha tweeted, "Today marks an important day in the history of Punjab as 3 crore Punjabis will together be sworn in as Chief Minister along with @BhagwantMann."

"Oath to change this corrupt system & to fulfill dreams of Shaheed-E-Azam Bhagat Singh & Babasaheb Ambedkar Ajj ton har Punjabi CM houga (from today onwards, every Punjabi will be CM)," he said in the tweet.

Chadha also shared his photo in a yellow turban on his twitter handle.

Newly-elected MLA from Anandpur Sahib Harjot Bains said, "Today marks the beginning of a new dawn in Punjab. Together, we will fulfil 'Shaheed-E-Azam' Bhagat Singh' dreams which will be the real tribute to our shaheeds."

The men were wearing yellow turbans while women were draped in a yellow 'dupatta'.

"We want to congratulate Bhagwant Mann and the entire Punjab," said a party supporter from Shutrana.

Another supporter, who came from Mann's Satoj village in Sangrur said, We have high expectations from him and he will definitely live up to them. The way Kejriwal did good work in Delhi, Mann will also do the same in Punjab.

When Mann was leaving for Khatkar Kalan from Mohali, a few of his supporters showered flower petals on his vehicle and congratulated him.

"I am very happy that my brother (Mann) is going to be the CM. We are very happy about it, said a woman supporter in Mohali.

The 48-year-old Mann had invited the people of the state to attend his swearing-in ceremony, saying the three crore people of Punjab will also take oath with him.

Foolproof security arrangements have been made for the ceremony and several senior officials, including inspector general and senior superintendents of police, have been deputed for the event.

Around 8,000 to 10,000 security personnel have been deployed for the event, said the officials.

The AAP romped home winning 92 seats in the 117-member Punjab Assembly, decimating the Congress and the SAD-BSP combine.