A youth identified as Sajjad Hussain Sheikh alias Waza was hit in the head and died instantly, they said. 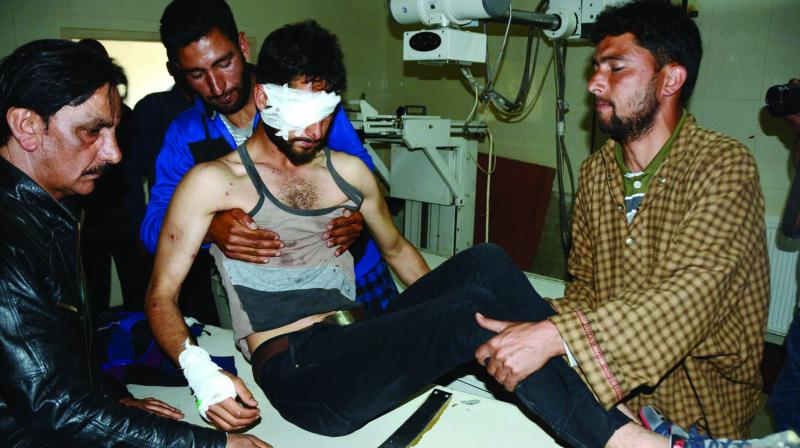 An injured student at a hospital in Srinagar. (Photo: PTI)

Srinagar: A youth was killed when security forces allegedly Border Security Force (BSF) opened fire in Srinagar’s Batamalloo area on Saturday evening. A report said that another person was injured in the shooting but the authorities are yet to confirm it.

In another incident, unidentified gunmen shot and critically wounded two persons in Pulwama’s Qasbayar village late on Saturday. One of them, identified as Bashir Ahmed Dar, succumbed to his injuries later. The authorities blamed the incident on separatists.

The witnesses said that two BSF vehicles were passing through SD Colony of the Srinagar suburb when someone hurled a stone at it which apparently prompted the men on board to open fire.

A youth identified as Sajjad Hussain Sheikh alias Waza was hit in the head and died instantly, they said.

The J&K police officials said that they are verifying the circumstances in which the BSF opened fire. “There was no deployment (of a security force) in the area. We’re told it was the BSF. We’re trying to verify it and to know as to why it opened fire,” said a police official.

Following the incidents, clashes erupted in some parts of Srinagar. Earlier in the day, over fifty students were injured in clashes with security forces in Pulwama.

The security forces fired teargas canisters and shotgun pellets to disperse angry students who were protesting against alleged highhandedness of security forces after they laid a naka outside government-run degree college in Pulwama. The students alleged that the security forces not only harassed them but also barged into the college premises where they were forced them to chant slogans denouncing  the separatists and the militants and the “freedom cause” and that when they protested, the latter resorted to “brute force” against them.

The police denied the charges and said that a normal naka was established around 200 meters away from the college. Doctors at the Pulwama district hospital said that they had till 4pm treated 54 students hit by teargas shells and pellets.

“As class work ended some miscreants started throwing stones at the naka party. In this incident some miscreants and police personnel were injured. One was referred to Srinagar hospital where his condition is stable,” it said in a statement.

Late Saturday evening, unidentified gunmen shot and critically wounded two persons in Pulwama's Qasbayar village. One of them identified as Bashir Ahmed Dar succumbed soon after being shifted to a nearby medical facility. The authorities have blamed the incident on separatist militants.