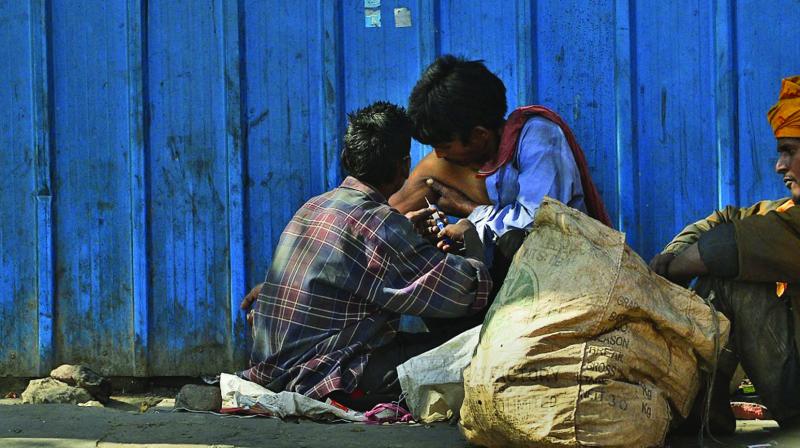 The last survey on drug abuse was released in 2004 for which the samples were collected between 2000-2001. (Representational image)

New Delhi: The Punjab Assembly elections earlier this year were fought and won on the promise of tackling the drug menace which has turned a huge chunk of the Punjab youth into addicts. The Prime Minister has time and again hinted that the money involved in the drug menace is linked to terrorism. The government is serious about waging a war against it, but it is relying on data that is almost two decades old. The last survey on drug abuse was released in 2004 for which the samples were collected between 2000-2001.

The social justice and empowerment ministry, despite offers from AIIMS and even the ministry for statistics and programme implementation (MoSPI) in the past two years, failed to conduct a national survey. In fact, it is still searching for an agency for the purpose, as the government now wants to follow the tendering process. In a country where the issue is rampant and has adversely affected the nation’s youth, a national survey is imperative to capture the pattern and extent of drug use, say experts. But the absence of valid data has hampered the government’s efforts to know how deep-rooted the problem is today.

The absence of a national survey on drug abuse is being felt the most at a time when the problem has assumed alarming proportions not only in the border state of Pun-jab, but also in other states like Kerala, Maharashtra, Madhya Pradesh, Tamil Nadu, Tripura and Mizoram.

According to the National Crime Records Bureau, there were 3,647 drugs-related suicide cases in India in 2014, of which Maharashtra reported the highest at 1,372. This was followed by Tamil Nadu, with 552 cases and Kerala, with 475.

Also, according to the last 2004 national survey on drug abuse, out of the sample size of 40,697 males aged between 12 years and 60 years, who were categorised as “current” or active users of drugs, 21 per cent were alcohol addicts, cannabis addicts were 3 per cent, opiates were 0.7 per cent and heroin addicts were 0.2 per cent.

Numerically it translated to alcohol addicts being 62.5 million, cannabis addicts as 8.7 million and opiates as numbering 2 million.

This last national survey report which was on the extent, pattern and trends of drug abuse in India was released in June 2004, while the sample for it was conducted in 2000-2001. The ministry for statistics and programme implementation (MoSPI) had in March 2015, suggested to the social justice ministry that it can conduct the survey with the help of NGOs and the National Sample Survey Organisation (NSSO). The same year, AIIMS too had sent the proposal to the ministry for conducting the survey on the extent, trend and pattern of drug abuse.

Despite these offers, the ministry for social justice subsequently decided that all work related to the conduct of a national survey through tendering process, sources told this newspaper. As a result of this long drawn process, the ministry is still in the process of finalising an agency for conducting the exercise.

Mr Modi in one of his earliest editions of the monthly radio talk show Mann Ki Baat in December 2014, had linked the money involved in the drug business to terrorism. In that broadcast, he had asked drug users to think of the possibility of money they spend on drugs eventually financing the bullets that kill the country’s security personnel. “Have you ever thought? Just imagine the money from these drugs going to terrorists. What if terrorists buy weapons with this money? And what if those weapons are used by a terrorist to pump bullets in the chest of my country’s security personnel,” he had said.

The Prime Minister had asked celebrities to raise awareness about this issue. “I request those who are active in social media to run a movement with the Drugs Free India hashtag,” he said, adding that most youngsters falling prey to drugs are active on social media.