Parrikar comments come against the backdrop of the death sentence given by a Pak military court to Kulbhushan Jadhav, a former Indian Navy official. 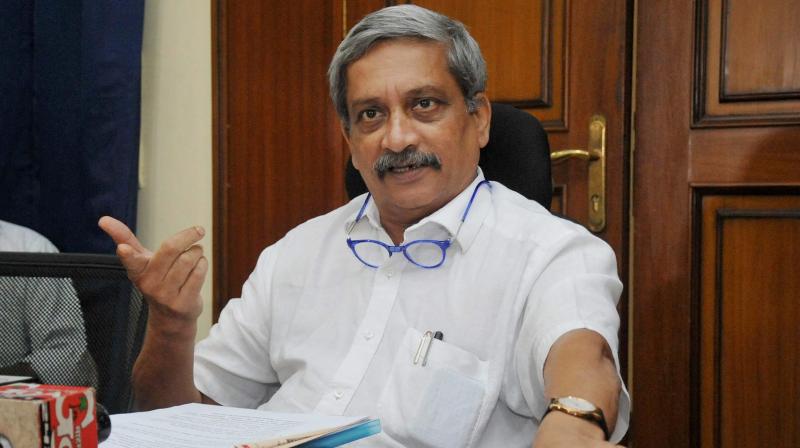 Panaji: Former defence minister Manohar Parrikar on Saturday dismissed Pakistan as an empty vessel making noise and said the neighbouring country is up to something or the other to remain engaged.

His comments come against the backdrop of the death sentence given by a Pakistani military court to Kulbhushan Jadhav, a former Indian Navy official.

“There is a proverb in Konkani, and Hindi as well which means empty vessels make the most noise. We should not take much note of what they (Pakistan) say,” Mr Parrikar said during an interview to DD News responding to a question on Pakistan.

“Pakistan wants some or other reason to remain engaged. It is playing a dangerous game. It should understand that if India starts retaliating, then Pakistan does not have the power to fight back, whatever they may project themselves as.”

“But we (India) want peace, we don’t want provocation, because of which they should give back Jadhav. First of all, he has been abducted. He was not in Pakistan. He was in Iran. Iran has said that Taliban kidnapped him and took him to Pakistan. Pakistan has a habit of doing something or other,” the BJP leader said.

“About Jadhav, I can only say that, for what Pakistan is going to do... for that Sushma Swaraj (external affairs minister) has given an apt reply. We will not keep quiet. Country will do what is required to do. We can take care of Pakistan if it tries to do anything ill-advised,” he said.

Meanwhile, the office of Mr Parrikar Saturday sought to clarify that his remarks on return to Goa after quitting as defence minister were in no way linked to the pressure of some key issues like Kashmir.

“The speech in local language of chief minister (Parrikar) regarding Kashmir issue was in no way connected to his becoming chief minister of Goa which was under the necessity of situation due to coalition partners’ demand,” the CMO said in a statement.

The CMO was reacting to remarks attributed to Mr Parrikar at an event here Friday that the pressure of some key issues, like Kashmir, was one of the reasons why he opted to quit as the defence minister and return to the coastal state.