The incident took place at 8.15 am and passengers on the train said that the train stopped with a jerk and the bogies derailed. 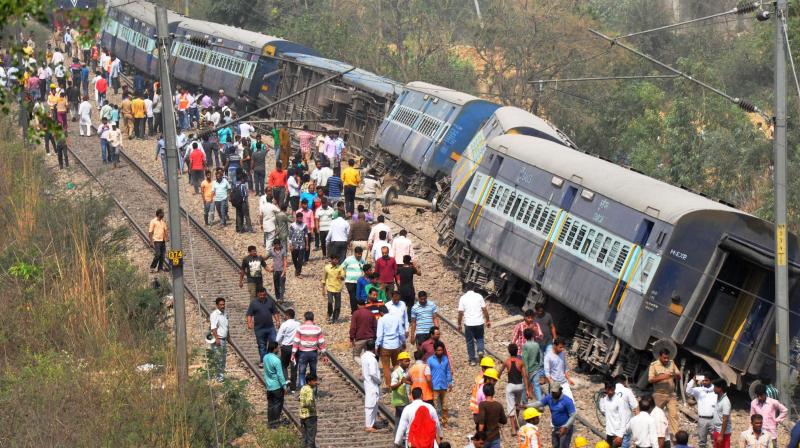 The incident took place at 8.15 am and passengers on the train said that the train stopped with a jerk and the bogies derailed. Several passengers were thrown out of the train n the incident.

Neeraj Sharma, CPRO, Northern Railway, said that there were no casualties in the accident. He said that an inquiry would be conducted to ascertain the reason for the derailment.

Medical teams reached the spot, and senior officials from Moradabad division reached the site of the accident to supervise rescue operations.

The injured persons have been admitted to hospitals in Rampur. The railway also released a list of 13 injured passengers. The Saharanpur-Lucknow route was clo-sed and trains on the route have been diverted.

Rampur SP K.K. Chaudhary told reporters that a three-foot-long portion of the railway track was missing and sabotage cannot be ruled out.

IG (ATS) Asim Arun said a team has reached the accident site and has begun probe to investigate if there was a possible terror angle to the derailment.

“The railways has arr-anged for buses for passengers. Food and water have also been provided to the stranded passengers,” said the northern railway’s spokesperson.

This is the second derailment incident in the past one fortnight in Uttar Pradesh. It may be recalled that on March 30, eight coaches of the Nizamuddin-bound Mahakaushal Express had derailed near Kulpahad railway station in Mahoba district, leaving 52 persons injured.

Nine of the injured passengers were admitted to the Mahoba district hospital in a serious condition, while the remaining were discharged after being given first aid at the Kulpahad Primary Health Centre.