According to reports, Mr Chattopadhay suggested the role of two DGPs, including the state police chief, in the drug case. 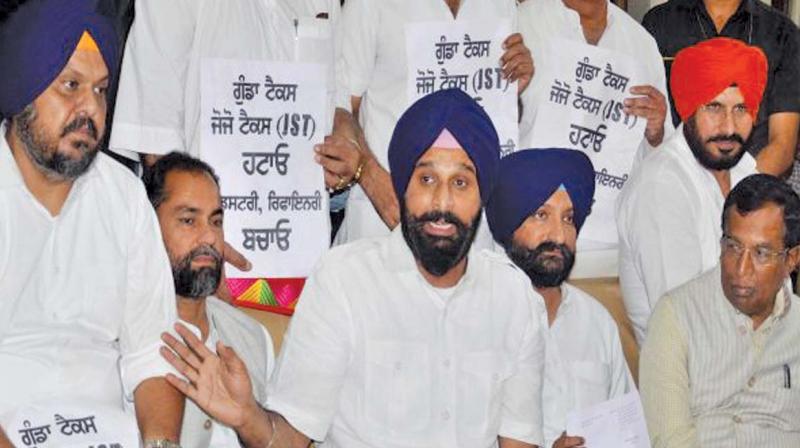 Former minister and Akali leader Bikram Singh Majithia (middle) has again come under a cloud for alleged links with drug mafia after the STF report.

A 34-page report submitted by the STF in HC says that Akali leader Bikram Singh Majithia had a role in facilitating supply of a drug to two Canadian NRIs in 2013 and there is enough evidence to investigate his role.

Chandigarh: The plot thickens on drug mafia probe in Punjab. A recent report by the special task force (STF) has completely shaken the political parties in the state. There were indications that the probe was getting murkier and now the STF report has named former minister and Akali leader Bikram Singh Majithia for his involvement in drug mafia.

The Punjab and Haryana high court had asked the STF to file a status report on the role of Mr Majithia, who is brother of Harsimrat Kaur Badal, Union minister and wife of SAD president and former deputy chief minister Sukhbir Badal.

A 34-page report of the STF says that Majithia had a “role in facilitating supply of a drug pseudoephedrine to two Canadian NRIs Satpreet Singh, alias Satta, and Parminder Singh, alias Pindi”, in the infamous 2013 Jagdish Bhola drug scandal.

The report chronicles the statements of three arrested accused Jagdish Bhola, Mr Majithia’s former election agent Maninder Singh, alias Bittu Aulakh, and Amritsar businessman Jagjit Singh Chahal, before the police and the Enforcement Directorate (ED) that is probing the money laundering angle. The report says that the statements of the three accused make it clear that Mr Majithia had a role in the supply of pseudoephedrine. He asked Chahal to supply it to Satta and Pindi. Mr Majithia’s intention to facilitate its supply is clear. Hence, questioning of Satta and Pindi is required to unearth the complicity of various persons. As per the findings, there is prima facie evidence on record to further investigate the role of Mr Majithia regarding the allegations, the report adds.

A few years ago when  Mr Majithia, who was quizzed by the Enforcement Directorate, in connection with the Rs 6,000-crore international drug racket case, said that he extended full cooperation to the ED but lamented that he was being subjected to “media trial”.

The report also raises doubts about the role of top police officers as well. One of the director generals of police Siddarth Chattopadhay in a plea before the high court blamed DGP Suresh Arora, DGP Dinkar Gupta and inspector general L.K. Yadav for dragging his name in a high-profile suicide case. According to reports, Mr Chattopadhay suggested the role of two DGPs, including the state police chief, in the drug case. He pointed at a benami property acquired by a DGP.

Both the Congress and the AAP, which had given a near clean chit to Mr Majithia in the drug trade matter, are finding it hard to react to the findings of the STF against the Akali leader. Chief minister Amarinder Singh had said that he would not act out of vendetta. Former Punjab Congress chief and sitting Rajya Sabha member Partap Singh Bajwa, who is known to be Amarinder’s bete noire, had questioned the chief minister’s soft approach towards the Akali leader. Mr Bajwa had said, “He talks of ‘no vendetta’. We are talking of justice to the people of Punjab. Those who looted Punjab for 10 years have to be made accountable for the acts of omission and commission. Bikram Majithia should have been booked a long time back.”   Over the last few days, the AAP’s Leader of the Opposition Sukhpal Khaira has been gunning for the state government, tweeting and reminding the government of the claims it had made in the run-up to the Assembly elections.

Ironically, only a few days back, the Punjab unit of the AAP had to face a lot of much embarrassment when its party convenor Arvind Kejriwal apologised to Mr Majithia in a defamation case.