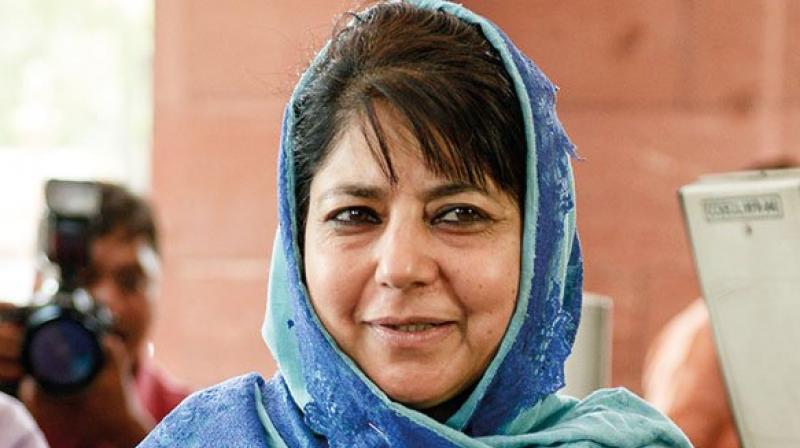 Jammu: The trial in the gruesome Kathua rape and murder case will begin on Monday against eight accused, including a juvenile, even as Jammu and Kashmir chief minister Mehbooba Mufti accepted the resignations of two controversial BJP ministers, who had participated in a rally in support of people arrested in connection with the rape and murder of an eight-year-old Muslim girl in Kathua.

On Monday, the chief judicial magistrate (CJM) of Kathua is expected to refer one of the chargesheets, in which seven people have been named, to the sessions court for trial as mandated under the law, officials said.

The CJM will, however, hold the trial for the juvenile as it is the designated court under the Juvenile Justice (Care and Protection of Children) Act, 2015, that deals with minor offenders, they said.

With these resignations, the number of ministers in the state government has come down to 22, including nine from the BJP. There are three vacancies in the council of ministers as the PDP had last month removed its finance minister Haseeb Drabu unceremoniously.

The Kathua girl was kidnapped on January 10 and her body was found on January 17. During investigation, the crime branch alleged she was drugged and repeatedly raped before being killed by crushing her head with stones.

The police have arrested eight persons, including the custodian of a temple, his son and two special police officers for their alleged involvement in the crime. A police sub-inspector and a head constable too have been arrested on charges of destroying evidence.  The crime branch of the J&K police after completing investigations into the gory incident filed two separate charge sheets in the court of Kathua’s CJM despite resistance shown by local lawyers.

The political war over the gruesome incident intensified on Sunday with the BJP demanded the sacking of J&K Congress chief Ghulam Ahmad Mir, claiming that he was seen in a video terming the police probe in the Kathua rape-and-murder case motivated and defending public protests against it. Mr Mir, however, claimed that he never raised questions on the state police’s prober.

Citing the BJP’s decision to remove two of its state ministers, who had joined public protests against the police probe, Union minister Prakash Javadekar shared a video featuring Mr Mir and wondered if Congress president Rahul Gandhi will point fingers at others but maintain silence on the comments of his party’s Jammu and Kashmir unit chief.

Mr Mir defended himself and said, “This is an old video. The statement was given by me in March. It was prior to the arrest of the mastermind and main accused, and others (in the Kathua case).”

In a related development, the Jammu High Court Bar Association (Jhcba) which had faced criticism from various quarters over its ongoing 12-day long agitation pressing for demands including handing over the Kathua rape and murder case to the CBI, welcomed the Supreme Court intervention into the matter and said it has full faith in the apex court. Earlier, taking strong note of some lawyers obs-tructing the judicial process in the Kathua gangrape and murder case, the Supreme Court had initiated a case on its own record, saying such impediment “affects the dispensation of justice and would amount to obstruction of access to justice”.

“We have full faith in the Supreme Court and we welcome its intervention in the case. It is now up to the court to decide whether it should be handed over to the CBI for further investigation or not,” senior advocate and Jhcba member Surinder Kour told reporters here.

The two sacked BJP ministers and relatives of the accused and supportive Jammu groups have been demanding a probe by Central Bureau of Investigation (CBI) into the gruesome incident.

Syed Naeem Akhter, chief spokesman of the state government, said that the decision not to involve the CBI was taken because the family of the victim was against it.

He also said that the CBI has a very bad track record in J&K and said the investigating agency looks like a “caged parrot”.