THE ASIAN AGE. | GURURAJ A. PANIYADI

Mr Rajesh Naik of Bantwal was the other giant killer, defeating district in-charge minister B. Ramanath Rai by a margin of 15,971 votes. 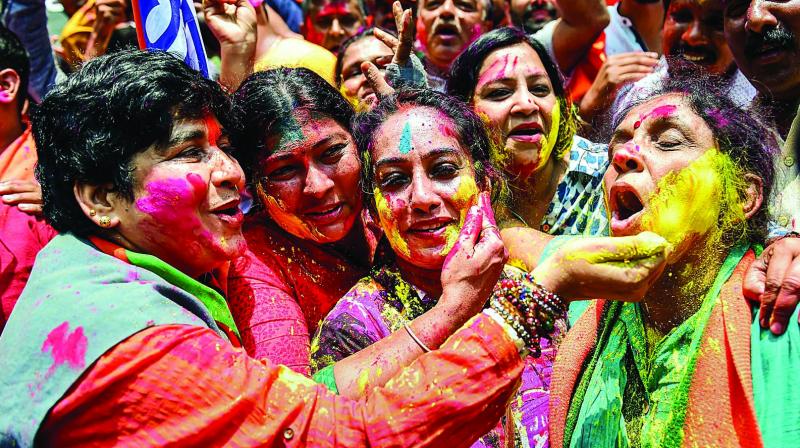 Mangaluru: The BJP washed away the Congress in all three coastal districts of Karnataka, winning 16 of the 19 seats here, and making a clean sweep of  Udupi district’s five Assembly constituencies, The saffron party succeeded in making a comeback in Dakshina Kannada by winning seven of its eight constituencies, defeating the Congress by not less than 15,000 votes in all of them. In Uttara Kannada too the party created history by winning four of the six seats.

The results these elections are unprecedented on the as this is the first time the BJP has seen such success in all three districts.

The party not only succeeded in winning its traditional constituencies, but also the minority strongholds of Bhatkal, Bantwal, Mangaluru City North, Mangaluru City South, Belthangady, Byndoor and Kumta.

The only Congressmen, who succeeded in retaining their seats were U.T. Khader in Mangaluru, R.V. Deshpande in Haliyal and Shivaram Hebbar in Yellapur.

While the Congress seemed shocked by the results, BJP leaders celebrated. “We were confident of victory as we worked hard for it. The party has performed excellently in the region. We are thankful to the people who have blessed us and we promise to work for them,” said the party’s Mangaluru division in-charge (Vibhag Prabhari), Uday Kumar Shetty.

Thirty-six-year-old Harish Poonja, turned to be the giant killer, defeating five time MLA, Vasanth  Bangera, who has been in electoral politics for 35 years, by a margin of 22,974 votes.

Mr Rajesh Naik of Bantwal was the other giant killer, defeating district in-charge minister B. Ramanath Rai by a margin of 15,971 votes.