The home ministry is likely to convene a meeting with the West Bengal government and Gorkha leaders to help resolve the crisis. 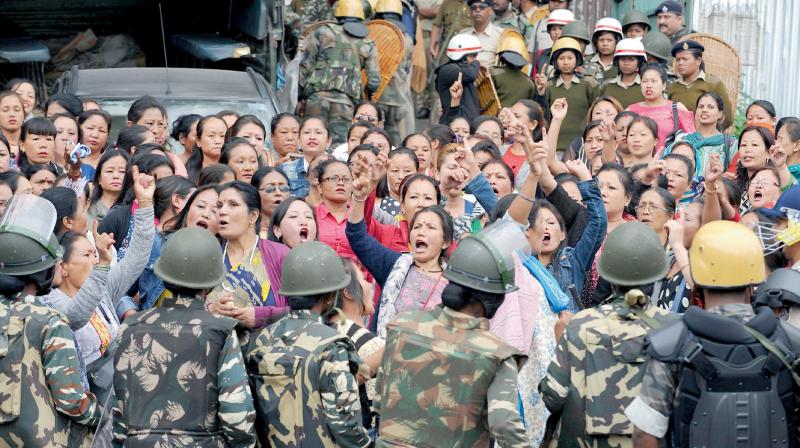 As protesters and the police clashed in Darjeeling after a series of raids on GJM offices in which “lethal weapons and bomb-making ingredients” were allegedly recovered, in New Delhi, GJM general secretary Roshan Giri, along with BJP’s Darjeeling MP S.S. Ahluwalia, met Union home minister Rajnath Singh to discuss the ongoing agitation and their demands.

The agitation in Darjeeling was initially against the forced imposition of the Bengali language in schools in the area, but has now transformed into a renewed demand for a separate Gorkhaland. The GJM urged the Centre to immediately intervene to help restore normality in the region.

The home ministry is likely to convene a meeting with the West Bengal government and Gorkha leaders to help resolve the crisis. Sources said the tripartite meeting is likely to be held on June 19.

Mr Giri, however, said the GJM will not take part in the June 19 meeting as it strongly backs the demand for full statehood. “The home minister has assured us that he would take up the matter with Prime Minister to find a solution,” he said.

The Centre has sought a report from the state about the spiralling crisis. Sources in the state secretariat in Kolkata said that no decision has been taken yet on participating in the tripartite meeting.

GJM supporters clashed with the police and security personnel at different places soon after the police recovered sophisticated cross-bows, a huge cache of arrows, large number of crackers, one country-made pistol, khukris, axes and cash during 9.30 am raids at the GJM’s office in Patlaybas, near party chief Bimal Gurung’s house.

Morcha supporters gathered nearby, started shouting slogans and pelted stones at the police. The police claimed the protesters also hurled petrol bombs and that’s why they had to resort to lathicharge and fire teargas shells. A media vehicle outside the party office was set on fire, allegedly by GJM supporters. In Kalimpong, a police post was set on fire, while a bus of the North Bengal State Transport Corporation was set on fire elsewhere.

Infuriated by the police raid, the GJM has called for an indefinite bandh in the Hills.

“It is within our constitutional rights to have bow and arrow. It is our traditional weapon that is used in archery and a plaything for children. We have a school programme scheduled on July 8 where these were to be used. The other things recovered are used for agriculture,” GJM general secretary Giri said.

“We had information that GJM workers were gathering in the area. We raided three places and recovered firearms, materials which look like bomb-making ingredients, contraband and lethal weapons,” Darjeeling SP Akhilesh Chaturvedi said.