India plays down China's Belt and Road Initiative at SCO

India has been opposing the project as one of its key components—China Pakistan Economic Corridor—passes through Pakistan-occupied Kashmir. 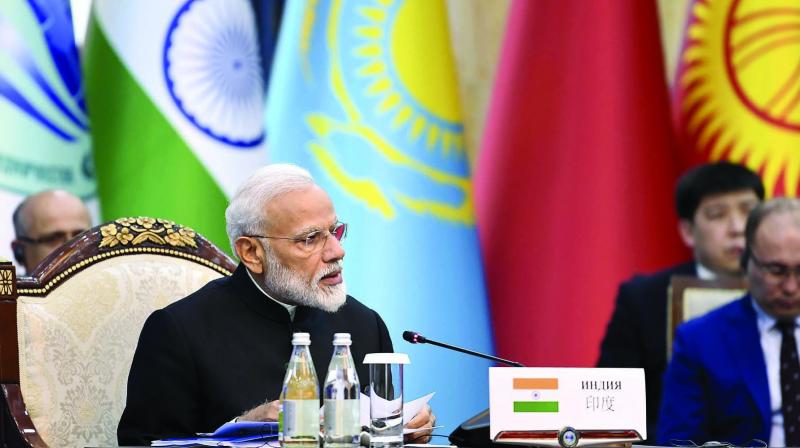 New Delhi: India maintained its skeptical stand by not endorsing Belt and Road Initiative of China when the matter came up for discussion before the Shanghai Cooperation Organisation in Bishkek.

This is in line with the concerns of New Delhi about the ambitious trade project. India has been opposing the project as one of its key components—China Pakistan Economic Corridor—passes through Pakistan-occupied Kashmir.

Barring India, all other members of SCO endorsed the project. “The Republic of Kazakhstan, the Kyrgyz Republic, the Islamic Republic of Pakistan, the Russian Federation, the Republic of Tajikistan and the Republic of Uzbekistan reaffirm their support for China’s Belt and Road Initiative and praise the results of the Second Belt and Road Forum for International Cooperation (which was held in April 26),” the Bishkek Declaration said.

The declaration acknowledged that implementation of BRI would include alignment of Eurasian Economic Union projects with those under China’s initiative, Hindustan Times reported.

PM Narendra Modi remarked the importance of better connectivity in his speech at the SCO summit but said that such initiatives must be based on “respect for sovereignty, regional integrity, good governance, transparency...and reliability”.

India says CPEC has security implications for the country as it includes highways that pose a threat to India. New Delhi is also wary of the fact that Beijing’s regulations for projects under BRI would favour Chinese firms and Indian firms won’t stand a chance.

India stayed away from both Belt and Road Forums hosted by China. India’s concerns about BRI are expected to be discussed when Xi and Modi meet at the second informal summit in October.