Recovery rate now stands at over 52 per cent. 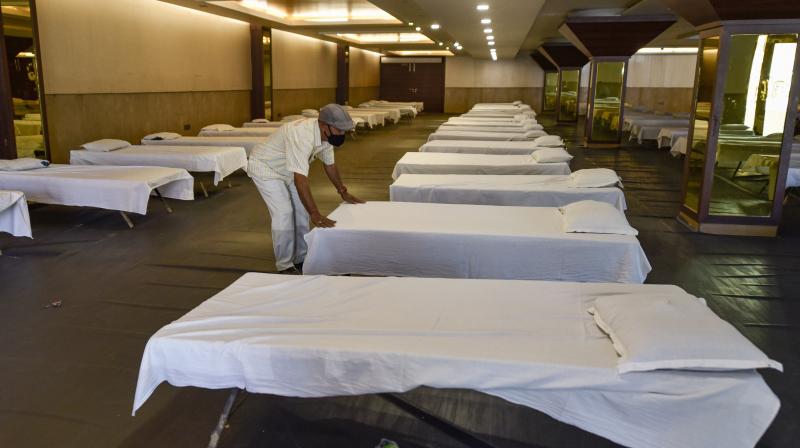 Beds being prepared at a Delhi isolation centre. (PTI)

The ministry further said that once the rates are fixed, they must be widely publicized, so that the infrastructural capacities are used optimally.

"States have also been asked to proactively engage with the private sector health providers and consider pooling in public and private healthcare facilities, as this will help in providing prompt, good quality and reasonable health care to COVID-19 patients," health ministry said.

Another 10K cases on Tuesday

India has added another 10,000+ cases to its coronavirus tally on Tuesday even as the recovery rate of patients continued to rise. Till Tuesday morning, 52.46 per cent of the positive patients have been discharged, which is over 1.38 per cent point higher than Monday. A total of 1,80,012 patients have been cured of COVID-19 till now while 1,53,178  cases are still under medical supervision.

Maharashtra, Delhi and Tamil Nadu continued to register high number of cases and about 75 per cent of total cases in India are reported from these 3 states alone.

Andhra Pradesh and Punjab have reported four fatalities each, Jammu and Kashmir and Karnataka three each, Telangana two and Bihar, Chandigarh, Himachal Pradesh and Kerala one each.

State chief minister Uddhav Thackeray has decided to allow opening of schools physically in rural areas. Mumbai's suburban train services too will resume from Tuesday but only for the staff of state government.

In view of rising cases, Tamil Nadu government has announced a complete lockdown in places like Chennai, Thiruvallur, Chengalpet, and Kancheepuram from June 19 to 30. Delhi, however, is still not going to be shut down, its chief minister Arvind Kejriwal said. Incidentally, Delhi is reporting highest increases for the last few days.

Meanwhile, Railways has so far deployed 204 isolation coaches in four states. Officials said Railways will insulate the roofs of these isolation coaches deployed in areas which experience high temperatures to make their interiors cooler and more comfortable for patients since all isolation wards are non-AC coaches.

For Delhi, at least 50 coaches with 800 beds have already been stationed at Shakur Basti railway station but none of them are in use so far. Another 500 more such isolation coaches for Covid-19 patients will be deployed in Delhi. In order to combat shortage of beds, Uttar Pradesh and Telangana are exploring the possibility of using such coaches.