One of the crew members was injured while the other three were found suffering from sea sickness following the incident. 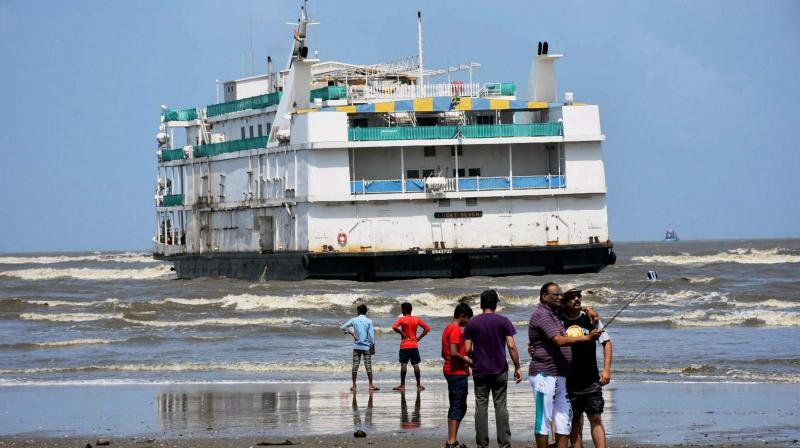 Tourists taking selfie near off shore casino vessel Lucky7 which got stranded at Miramar beach in Panjim on Sunday. (Photo: PTI)

Panaji: The Indian Coast Guard rescued four crew members from an off shore casino vessel which got stuck on a sandbar off Miramar beach near Panaji.

One of the crew members was injured while the other three were found suffering from sea sickness following the incident which took place Saturday night.

The ship, MV Lucky 7, was being brought from Mormugao harbour to Mandovi river in Panaji where it is supposed to be anchored.

"The vessel got stuck in the Aguada sandbar off the Miramar coast. We received a call last night to rescue the crew members who were in distress," Deputy Inspector General of Indian Coast Guard Manoj Badkar said.

A Coast Guard helicopter was pressed into action and the four crew members, including one who was injured, were rescued. The three other rescued crew members of the vessel were extremely sea sick, Badkar said.

There were 15 more crew members, including the vessel's master on board, but there was no request to rescue them, he said adding that the Coast Guard is in touch with the state government to help them in case of any oil spillage from the ship.

MV Lucky 7 is the sixth off shore casino vessel which has been permitted by the state government to operate in the Mandovi river.

The casino is learnt to be owned by former Haryana minister Gopal Kanda.

Aanand Madgaonkar, an expert salvager told reporters at Miramar beach on Sunday that the crew members took high risk unnecessarily to bring the vessel in the Mandovi river from Mormugao harbour when it is well known that the Aguada sandbar area is closed for navigation (during the monsoon).

He said the vessel owner could have waited till September when the sandbar is opened for traffic and then brought in the Mandovi river.

Madgaonkar said the ship owners will try to salvage the vessel this evening when the tide is expected to be favourable.

The vessel should be removed from the sandbar or else it will affect the Miramar beach, he said.

Notably, the BJP-led Goa government had last month promised in its 'common minimum programme' to shift the off-shore casinos from the river.

A group of NGOs in Goa has been opposing the off shore casinos in the Mandovi river flowing along the Panaji city, alleging that they block the channel of the movement of ships.

Some social activists have also claimed that the casinos are promoting social evils.