India   All India  16 Jul 2018  Kingmaker Kamaraj: A symbol of selflessness and simplicity
India, All India

Kingmaker Kamaraj: A symbol of selflessness and simplicity 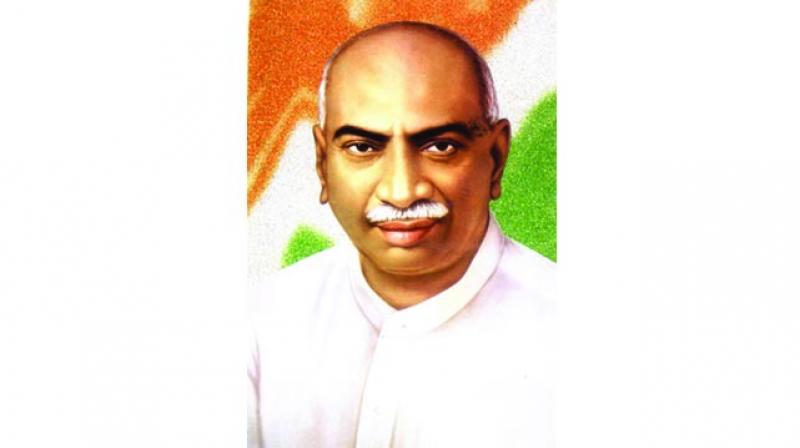 July 15 marked the 115th birth anniversary of K. Kamaraj who played a crucial role in the country’s post-Independence history, especially after the death of India’s first and longest serving Prime Minister Jawaharlal Nehru.

Born in 1903 in a poor and humble family of Nadars, one of the most backward communities of Tamil Nadu (then Madras presidency), Kamaraj had his schooling only for six years. He was barely 15 when he heard of the Jallianwala Bagh massacre in 1919, and made up his mind to join the freedom movement. He didn’t have to wait for long as Gandhiji visited Madurai in early 1921, and the young Kamaraj was inspired by him to be an active participant in the non-cooperation movement. In April 1930, Kamaraj took part in the Salt Satyagraha (civil disobedience) movement in Vedaranyam and was sentenced to two years imprisonment. He spent nearly eight years in British jails, including the longest spell of 32 months during the Quit India movement.

Kamaraj was elected to the Madras Legislative Assembly in 1937 and again in 1946. He was also elected to the Constituent Assembly and later to the first Parliament of independent India in 1952. Kamaraj was elected as chief minister of Madras in 1954 succeeding C. Rajagopalachari who was earlier the governor of West Bengal and the first Indian governor-general after Mountbatten. His nine years as chief minister saw Madras undergoing tremendous industrial and agricultural progress. It became amongst the best-administered states, which made Kamaraj a popular figure in the country. In 1963, when the Congress lost three important byelections, Kamaraj, along with some other chief ministers — Sanjiva Reddy, S. Nijalingappa and Biju Patnaik — suggested to Prime Minister Jawaharlal Nehru that senior leaders in both the Centre and states must give up ministerial posts and take up organisational work. The suggestion was accepted by the Prime Minister and six Union ministers, including Morarji Desai, Lal Bahadur Shastri and six chief ministers, amongst them Partap Singh Kairon (Punjab) and Biju Patnaik (Odisha), resigned from their high positions.

But it was after the death of Nehru in May 1964 that Kamaraj played the role of kingmaker, not once but on three occasions within a span of as many years. After the death of Govind Ballabh Pant in 1961, Morarji Desai who was then finance minister regarded himself as the natural successor of Nehru. He had many loyal adherents in the Congress Parliamentary Party because of his seniority, reputation for integrity and administrative ability. But according to many Congress leaders, he was rigid and inflexible in outlook and had the reputation of being self-righteous, intolerant and right-winger. Shastri was mild, tactful and malleable, highly respected and known to be personally incorruptible.

Journalist Durga Das in his famous book India: From Curzon to Nehru & After corroborates this further: “But Shastri had one big advantage over Desai. Congress president Kamaraj and some of the senior members of the high command favoured Shastri because they had cordial relations with him and, what is more, considered him easy to get on with. They considered Desai the stubborn type who would prove difficult as a colleague… Indira Gandhi, who was in mourning, was not in the running, and Nanda (the acting Prime Minister) had hardly any support.”

Kamaraj played his cards dexterously and evolved a novel concept of consensus. Though Desai was against this formula he was heavily outnumbered in the Congress Working Committee (CWC), which gave Kamaraj the authority to go ahead with his plan. Kamaraj consulted the members of the Congress Parliamentary Party and chief ministers, and declared Lal Bahadur as the winner. Many supporters of Morarji Desai urged him to challenge the consensus and press the CPP to vote. However, Desai — a disciplined Gandhian — bowed to the verdict but refused to join the Shastri Cabinet. A few months later Indira Gandhi was persuaded by Shastri to join his Cabinet with a portfolio of her choice. She agreed and became the minister for information and broadcasting. In 1963, Kamaraj and Biju Patnaik had suggested that Indira Gandhi should be made minister for external affairs. But Nehru had turned down the proposal.

After the sudden death of Shastri in Tashkent on January 11, 1966, the struggle for succession, averted by Kamaraj’s “consensus formula” in 1966, could not be warded off. This time Morarji Desai decided to fight it out against Indira Gandhi who had by now become the popular choice of the party. With Kamaraj on her side (her other notable supporters were Jagjivan Ram, Y.B. Chavan and Ram Subhag Singh) and having the support of most of the chief ministers, Indira Gandhi took up the challenge. In the trial of strength that followed in the CPP, Indira Gandhi defeated Morarji Desai by an impressive margin of 186 votes (355 to 169).

For the fourth successive time, since 1952, the Congress was returned to power in the 1967 general elections, but with its majority considerably reduced from 369 in 1962 to 285 in 1967. Morarji Desai once again emerged as a serious candidate for prime ministership. Kamaraj, who himself lost in his home state, was not in the same position as he was on earlier two occasions. His relations with Indira Gandhi had also suffered a setback and he was now closer to Morarji Desai. Kamaraj managed to avert a contest with great difficulty. Morarji Desai was prevailed upon by the Syndicate (S.K. Patil, N. Sanjiva Reddy, Atulya Ghosh, Nijalingappa) to accept deputy prime ministership under Indira Gandhi who was once again elected the CPP leader by consensus.
Kamaraj presided over three sessions of Indian National Congress — Bhubaneswar (1964), Durgapur (1965) and Jaipur (1966). In the 1967 general election, with the steep rise of the DMK in Madras (Tamil Nadu), Kamaraj lost his seat of Virudhunagar to a student leader. This undermined his prestige and stature considerably. But soon he won from Nagercoil parliamentary constituency, in a byelection, which revived his image to some extent. However, with the Congress split in 1969 he had decided to throw his lot with Morarji Desai and Congress(O) as his relations with Indira Gandhi had become strained, Kamaraj virtually retired from public life and died in 1975 at the age of 72. He was posthumously awarded the Bharat Ratna by the Indira Gandhi government as a recognition of his high integrity, public morality and selfless services to the nation.

The writer, an ex-Army officer and a former member of the National Commission on Minorities, is a New Delhi-based political analyst