Prasad served IAF for around nine years to take up a job at the Railways but he started a poultry farm after failing to land the job. 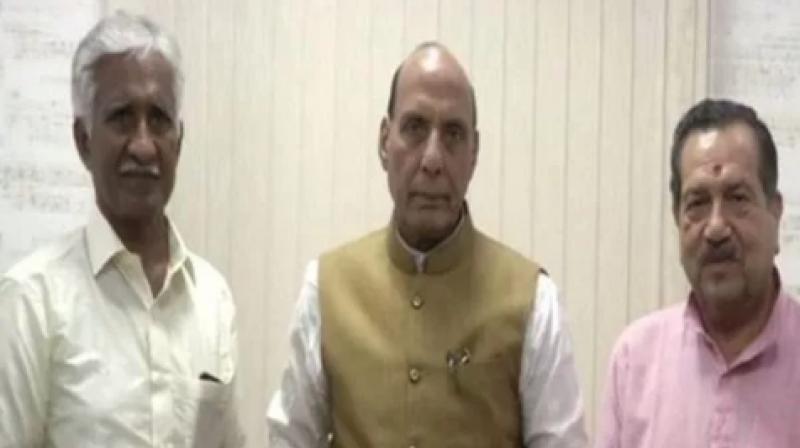 Union Defence Minister Rajnath Singh met Airman C B R Prasad on Monday and received the cheque from him.

“Rajnath Singh was happy to see that such a small sepoy was giving his entire savings back to the defence,” he said.

Presently, Prasad, 74, runs a poultry farm. He said, “After fulfilling my family responsibilities, I thought I should give back to the armed forces whatever I got from there. I decided to give Rs 1.08 crore to the defence ministry.”

Prasad served the IAF for around nine years to take up a job at the Indian Railways. However, he started a poultry farm after failing to land the job.

Prasad was all smiles when asked if his family supported him. He said, “Absolutely, no problem. I have given my daughter two per cent of my property and one per cent to my wife. Rest 97 per cent, I am giving back to society.”

He recalled his days of struggle and said, “I left home with Rs 5 in my pocket and earned 500-acre land with my bare hard work.”

He has also set up a sports campus to trains kids with the aim to participate in the Olympics.

He said: “As a child, I dreamt of winning an Olympic medal but could not do so. I built a sports university-like campus in about 50 acres of land, I have been training children for last 20-years.”