Pictures have come out, showing rescuers passing down a young child pulled out of the rubble, wrapped in blankets. 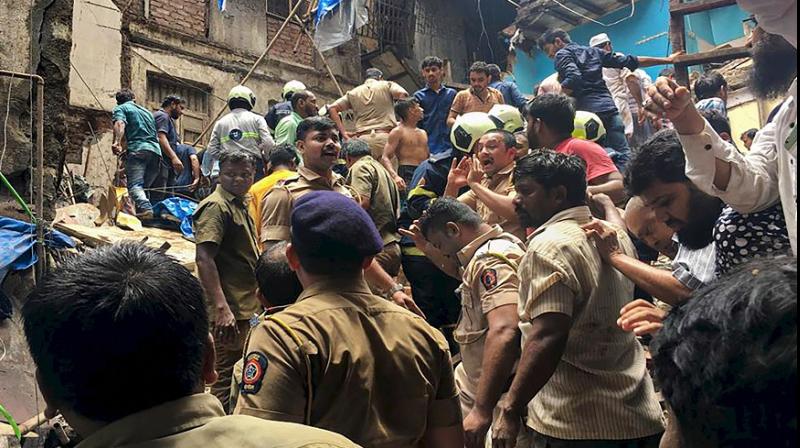 ‘This building must be 90-100 years old. I saw the bodies of some children. There were some seven-eight families in the building,’ eyewitnesses said at the scene. (Photo: PTI)

Mumbai: The narrow lanes and dense neighbourhood of Mumbai’s Dongri, where the four story building collapsed on Tuesday morning, have become a huge challenge for the rescue workers. As per latest reports, 2 people have died, six are injured and five have been rescued. The constricted lanes made it difficult for the fire brigade, Mumbai police and civic officials to access the site and they were forced to park some distance away.

#WATCH Mumbai: A woman being rescued by NDRF personnel from the debris of the building that collapsed in Dongri, today. 2 people have died & 7 people have been injured in the incident. #Maharashtra pic.twitter.com/tmzV3Dmm7C

So to lend a helping hand in the rescue operations by the disaster response personnel and policemen, residents of the area formed a human chain and tried to remove the debris, brick by brick lifting slabs of concrete in their search for survivors.

The 100-year-old "Kesarbai" building collapsed around 11.40 am, making a loud sound that one resident compared to an "earthquake". Over 40 people are feared trapped under the decades-old building that was reduced to a mass of rubble, wires and concrete.

Pictures have come out, showing rescuers passing down a young child pulled out of the rubble, wrapped in blankets.

Three teams of the National Disaster Response Force joined in the rescue.

The area, full of dilapidated buildings, had been flooded in bouts of heavy rain in the past few weeks.

"This building must be 90-100 years old. I saw the bodies of some children. There were some seven-eight families in the building," an eyewitness told NDTV.

Critics and opposition politicians called it a "man-made" disaster exacerbated by corruption and lack of safety norms.

This is the second major building collapse this month.

In May, the Brihanmumbai Municipal Corporation had identified 499 buildings as "dangerous" because they were old, rundown and violated safety rules; last year it was 619.