Reportedly many of the jail inmates and police personnel deployed in the jail have been infected with COVID-19. 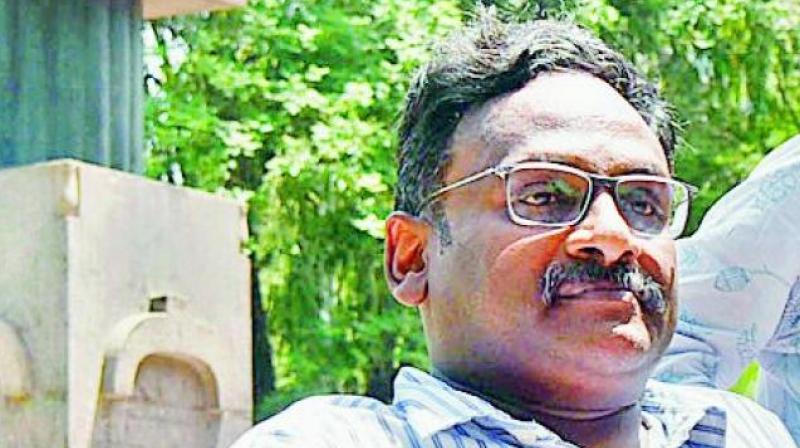 Hyderabad: The committee for the defence and release of Dr GN Saibaba urged the Maharashtra government to release him in view of Covid-19 outbreak in Nagpur prison where he is lodged and the already precarious state of his health. Reportedly many of the jail inmates and police personnel deployed in the jail have been infected with COVID-19.

Speaking to The Asian Age, G. Ramadevudu, Saibaba’s younger brother, who lives in Hyderabad said, “In view of Covid-19 crisis, I have applied for parole for the second time on June 16. We haven’t received any reply from the jail authorities. My brother Saibaba who was an ex-Delhi university professor is 90% physically challenged and has remained incarcerated in the Nagpur central jail’s ‘and a cell’ (solitary confinement) since his conviction on March 7, 2017.”

Compounding the situation, Ramadevudu added is the fact that their 74-year-old mother has been diagnosed with high grade non-Hodgkinson lymphoma cancer in part of the immune system called the lymphatic system. It limits the body’s ability to fight infection. Saibaba himself suffer from heart and kidney issues and recently he was diagnosed with gallstones and surgery was recommended. However, as there is no one to take care of him, he was couldn’t undergo the surgery. Considering all this, Ramadevudu urged the jail authorities for parole.

When he recently spoke to us, Saibaba complained of severe pains in body parts like shoulders and hands. One of the prisoners near his cell tested positive for Covid-19. “The disease has reached very close to me,” Saibaba is reported to have said, and that it was only a ‘matter of time’ since it reaches his cell as he is highly vulnerable due to existing co-morbidities. “My brother Saibaba (53) is wheelchair-bound. If infected with Covid-19, he cannot recover and survive on his own,” said Ramadevudu.

The first time Ramadevudu applied for parole, the Nagpur jail authorities rejected the application "based on the 'false' report by Telangana state police claiming that my residence in Jawaharnagar and nearby areas MoulaAli are in containment zones. But, actually, they are not. However, now the definition of containment has been changed, we have applied for parole for the second time and its almost a month now but we are yet to hear from the jail authorities."

Outraged at this inhumane treatment of a sick, disabled man, Prof. G. Haragopal, chairman of the committee for the defence and release of Dr. G. N. Saibaba said "In view of the precarious health condition of Dr. G. N. Saibaba, we appeal to the Maharashtra state government and the central government to release him by granting him bail or parole immediately so that he can avail appropriate medical treatment either in Hyderabad or Delhi where his family members are living,"