There was no immediate reaction from the Prasar Bharati, which runs Doordarshan and All India Radio. 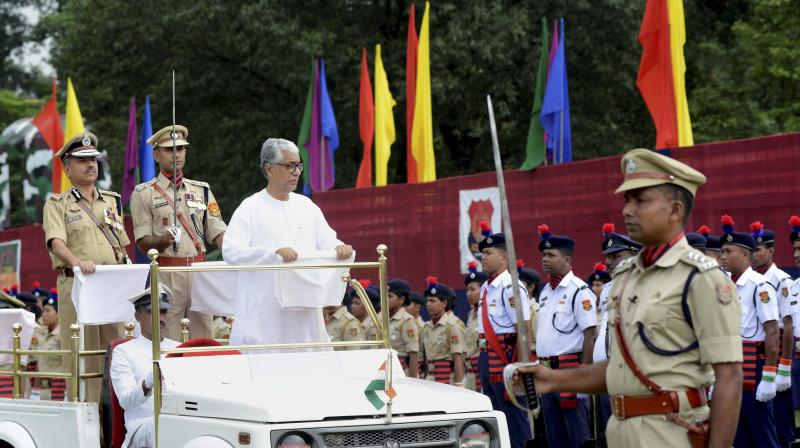 Chief Minister Manik Sarkar refused to make any changes in the speech and described it as unprecedented, undemocratic, autocratic and intolerant step. (Photo: PTI)

Agartala/New Delhi: Tripura Chief Minister Manik Sarkar alleged on Tuesday that Doordarshan and All India Radio (AIR) refused to broadcast his Independence Day address unless he "reshaped" it and termed it as an "undemocratic, autocratic and intolerant step".

There was no immediate reaction from the Prasar Bharati, which runs Doordarshan and All India Radio.

A Tripura government press statement alleged that Doordarshan and AIR had recorded Sarkar's speech on August 12.

At 7 pm on Monday, the Chief Minister's office was informed through a letter that his speech would not be broadcast unless he "reshaped it".

The letter purportedly said, "The message of the Chief Minister was closely examined by competent authority. In view of the sanctity of the occasion, the broadcast code and responsibility of the public broadcaster it is not possible to telecast it in the present format."

"However, Doordarshan/Prasar Bharati will be happy if the chief minister agrees to reshape the content making it suitable to the solemnity of the occasion and sentiment of the people," it purportedly said.

The CMO statement claimed, "The chief minister clearly stated that he would not change a single word and described it as unprecedented, undemocratic, autocratic and intolerant step."

Sarkar's speech was supposed to be broadcast on Tuesday by Doordarshan and AIR in Tripura.

CPI(M) general secretary Sitaram Yechury said Doordarshan was "not the private property" of the BJP-RSS and accused Prime Minister Narendra Modi of "instructing his cronies to black out voices" of the opposition, including that of an elected chief minister.

In a statement, the CPI-M Politburo said it "strongly condemns the refusal by the Doordarshan and All India Radio to broadcast the customary Independence Day address of Sarkar".

"The Doordarshan and All India Radio had recorded his speech for the occasion. However, they subsequently informed him that the speech cannot be carried as it is and asked him to 'reshape' it," it said.

The party demanded action against those responsible for "prohibiting" the broadcast.

"This is a gross infringement on the right of a chief minister to address the people of his state on Independence Day. This act is reminiscent of the Emergency days and goes beyond as it seeks to gag the elected Chief Minister of a state. The central government is trampling upon the autonomy of Doordarshan/AIR and Prasar Bharati by such acts of censorship," the statement said.

Tagging the tweet, Yechury hit out at the central government saying the channel's alleged refusal to air Sarkar's speech was "illegal".

"PM can pay homilies to cooperative federalism while instructing his cronies to black out voices of the Opposition, including an elected CM.

"If this isn't authoritarianism & undeclared Emergency, what is? This will be fought back by the CPM, people of Tripura and all our citizens," the Marxist leader tweeted.