NRC is being updated with March 24, 1971, as the cut-off date to include the names of genuine Indian citizens. 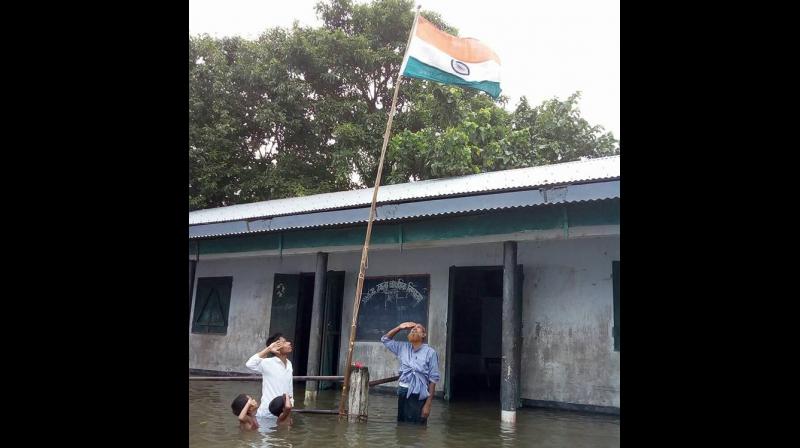 Tajen Sikdar, the head teacher of the primary school in Dhubri district, who had stood in the flood water with Haider Ali Khan and two others, said on Thursday that Haider's name was not in the draft NRC. (Photo: Facebook/@Mizanur Rahman)

Dhubr/Guwahati: A nine-year-old boy, whose photograph of saluting the national flag in chest-deep flood water in an Assam school on Independence Day last year had gone viral, has failed to find a place in the final draft of the National Register of Citizens (NRC).

Tajen Sikdar, the head teacher of the primary school in Dhubri district, who had stood in the flood water with Haider Ali Khan and two others, told PTI on Thursday that Haider's name was not in the draft NRC that was published on July 30, though those of his family members was there.

The eligible documents, including Haider's linkage and legacy data drawn from his great-grandfather Sukur Ali who was in the 1951 NRC, his birth certificate, family land records and a certificate from his school were submitted in 2015 for the inclusion of his name in the NRC, Sikdar said.

The names of Haider's grandfather, Alom Khan; mother Jaibon Khatun, who works as a midday-meal cook; elder brother Jaidor and younger sister Rina are in the draft, said Sikdar, whose name is also on the list.

Stating that Haider's mother is poor and does not know about the NRC, the head teacher said he would help her to file the form for inclusion of her son's name in the register when the claims and objection process starts.

The boy's father, Rupnal Khan, who was a scrap collector in neighbouring Kokrajhar district, lost his life in the 2012 ethnic clash there, Sikdar informed.

The lower primary school is situated about 2.5 km from Fakirganj town in the district and 200 km west of Guwahati.

The NRC is being updated with March 24, 1971, as the cut-off date to include the names of genuine Indian citizens and identify illegal migrants.

Over 2.89 crore people were found to be eligible for inclusion in the draft NRC out of a total 3.29 crore applicants. Around 40.07 lakh applicants, however, did not find a place in the document.

The claims and objections to the draft NRC will start from August 28 before the final list is out as per the directive of the Supreme Court.

Assam, which has witnessed an influx of people from neighbouring Bangladesh since the early 20th century, is the only state having an NRC, which was first prepared in 1951.