The city and its adjoining areas had received nearly 500 mm of rainfall in a day, which had created a flood-like situation. 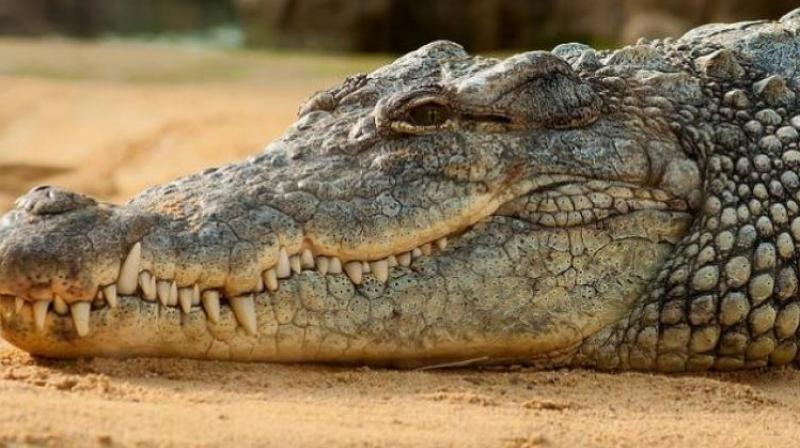 Water from the overflowing Vishwamitri river entered several localities in the city, bringing with it many crocodiles. (Photo: Representational)

Vadodara: As many as 35 crocodiles have been rescued so far from various parts of the city ever since heavy rains battered the city and its surrounding areas over a fortnight ago, a forest official said on Friday.

The city and its adjoining areas had received nearly 500 mm of rainfall in a day till August 1 morning, which had created a flood-like situation.

Water from the overflowing Vishwamitri river entered several localities in the city, bringing with it many crocodiles. According to the official, till August 8, around 22 crocodiles had been rescued.

After that, at least 13 others were rescued from various parts of the city. "Apart from the forest department, volunteers of NGOs working in the field of wildlife and animal welfare, as well as teams of NDRF are involved in the task of safely capturing and rescuing crocodiles from parts of the city," Vadodara range forest officer (RFO), Nidhi Dave, said.

"They had captured 22 crocodiles till August 8. After that they rescued another 13 crocodiles from different localities in the city, thereby taking the total number of crocodiles rescued to 35," she added.

The Vishwamitri flows through the middle of the city and joins the Dhadhar river, which passes through Vadodara district.

It is believed the Vishwamitri and Dhadhar rivers are home to more than 250 crocodiles. Some of the areas from where the crocodiles were rescued include Kalali village on the outskirts of Vadodara, central jail compound premises, Fatehgunj, Sayajigunj, Rajmahal Road and Akota, the officials said.