Fears over couple's health had fuelled wave of recent protests in Abuja that descended into bloodshed after crackdown from security forces. 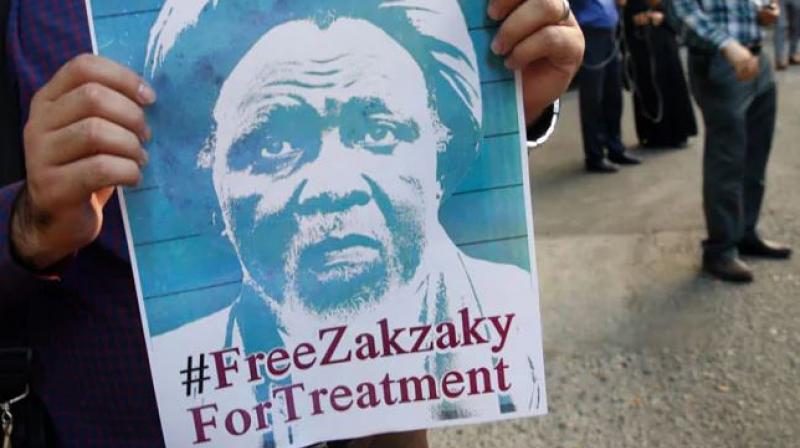 The leader of the Islamic Movement in Nigeria (IMN) had been in custody in Nigeria along with his wife Zeenah Ibrahim since their arrest in December 2015 after violence that saw the army kill some 350 of his followers. (Photo: AFP)

New Delhi: Nigerian Shiite leader Ibrahim Zakzaky - whose poor health in detention fuelled a wave of violent protests in Abuja - has left a hospital in Gurgaon near Delhi where he arrived for treatment this week, the clinic said Friday, while his office said he was heading home.

The leader of the Islamic Movement in Nigeria (IMN) had been in custody in Nigeria along with his wife Zeenah Ibrahim since their arrest in December 2015 after violence that saw the army kill some 350 of his followers.

On Monday, the cleric departed Nigeria to receive medical treatment in India but an official from the Medanta hospital in Gurgaon told AFP that he had left the clinic late Thursday.

A statement from his office on Twitter on Thursday said he was due to take off from New Delhi at 10:00 pm (0430 GMT) bound for Nigeria but there was no immediate confirmation that he had left.

Fears over the couple's health had fuelled a wave of recent protests in Abuja that descended into bloodshed after a brutal crackdown from security forces.

A court last week granted permission for them to receive medical care in India under Nigerian government supervision.

But the authorities insisted they must return to Nigeria to stand trial once their treatment is completed.

Zakzaky, in his mid-sixties, was arrested after violence in the northern city of Zaria saw hundreds of his supporters gunned down by security forces and buried in mass graves.

The cleric's lawyers say he has lost his sight in one eye, is on the verge of going blind in the other and still has bullet fragments lodged in his body from the violence. His supporters say he has suffered a series of minor strokes.

The cleric and his group, which emerged from a student movement in the 1970s, have been at loggerheads with the authorities for years because of calls for an Iranian-style Islamic revolution in Nigeria.

Shiites make up a small minority in predominantly Sunni Muslim northern Nigeria. Estimates put their numbers at around four million in a national population of about 190 million.