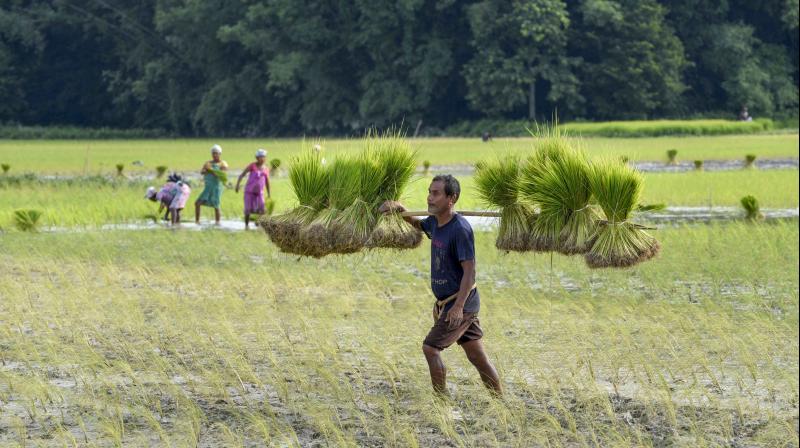 A farmer works at his field. — PTI representational picture

Maharashtra chief Minister Uddhav Thackeray on Saturday said that his government has made 29.50 lakh farmers in the state debt-free by depositing Rs 18,980 crore into their bank accounts. The government will focus on farmers and the working class as it tries to transform Maharashtra into a welfare state, he added.

Mr Thackeray, who hoisted the national flag at Mantralaya in south Mumbai on the occasion of 74th Independence Day, directed the administration to ensure better health facilities to remote areas of the state. Stating that the government has started the process of unlocking the state “cautiously in a staggered manner”, Mr Thackeray also noted that Maharashtra has increased Covid-19 tests on a “big scale”.

He said the government also procured 418.8 quintal cotton, highest in the last 10 years. The chief minister observed that schools could not be reopened in the state due to the Covid-19 threat, but the government took steps to see education is being imparted to students through Google Classroom initiative. “Maharashtra has become the first state to take such a step in the country,” he added.

The Chief Minister said that around 66,300 industrial units have resumed operations after the government set in motion the process of unlocking. He said more than 16 lakh workers have returned to their workplaces. “The government has signed MoUs worth around Rs 16,000 crore with investors from 12 countries and more agreements worth Rs 8,000 crore will be inked,” Mr Thackeray said.

“The government also launched ‘MahaJobs’ portal to ensure that locals, Marathi people get employment,” he added. Mr Thackeray said the government will lay stress on providing proper healthcare facilities in both the urban and remote areas in the state. The chief minister hailed Covid-19 warriors, such as doctors, nurses, policemen and others for and also extolled cops who have been announced the President’s Medal and bravery awards.

The Sena chief said the work on Hindu Hrudaysamrat Balasaheb Thackeray Maharashtra Samruddhi Mahamarg, that will connect Mumbai to Nagpur in Vidarbha, has been fast-tracked, and added that townships will be set up at 24 places along the expressway.