India   All India  16 Aug 2021  Afghans with ties to India fear for their safety
India, All India

Afghans with ties to India fear for their safety

There are many Afghan nationals who over the decades have studied in India, held positions in past Afghan governments 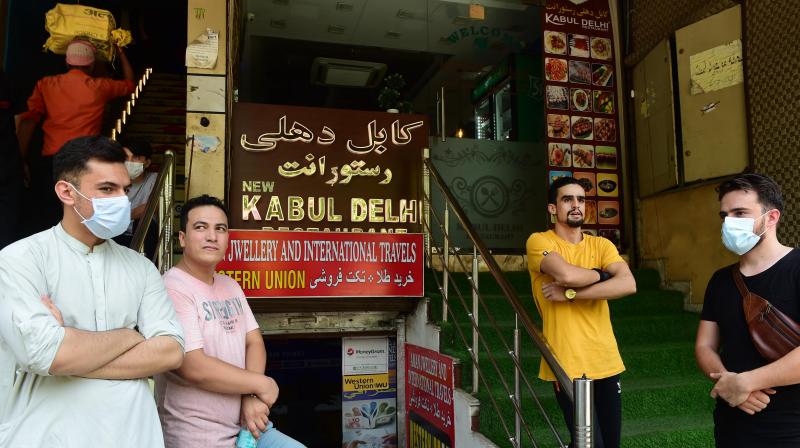 Afghans gather outside a restaurant, worrying about the current situation in their country, at Lajpat Nagar in New Delhi, Monday, Aug 16, 2021. (PTI/Kamal Kishore)

Hyderabad: It is not just Afghan nationals with connections to Western powers —  such as translators and fixers who worked with the US, British, or other Western armies in Afghanistan for years — who are worried for their future and their lives, but also those Afghans with any connection to India. Afghan citizens with past or present ties with India and now stuck in their country are a worried lot, holding their breath amidst an increasing air of uncertainty and fear after the Taliban took complete control of Afghanistan.

“It is not wise for us to either reveal our location or our names. Because of our ties and connections with India, we are marked people,” a person currently in Afghanistan, and with a long association with Hyderabad, told Deccan Chronicle on Monday.

There are many Afghan nationals who over the decades have studied in India, held positions in past Afghan governments, as well as in the recent administration of former president Ashraf Ghani who fled Afghanistan ahead of the Taliban taking control of Kabul, the country’s capital. Some have been associated with Indian government-sponsored infrastructure projects in Afghanistan or were part of cultural exchanges.

“Because of the close association of such people with India, and because of the geopolitical reality of India, Afghanistan and what is between the two nations, such individuals are very worried about their safety, security,” the person said.

The fear for their own lives and that of their families, or even friends and associates, is very real. Many people who believe that they could be potential Taliban targets are making furtive attempts to shift from one house to another where possible and keep moving in order to avoid being targeted by Afghanistan’s new rulers.

It is like living through a doomsday movie, people rushing to safety but with really nowhere to go, hanging on to planes and falling to their deaths, the Afghan national said. “The speed at which the Talibs took control was completely unexpected. It is like we went to sleep at night in a free Afghanistan and woke up to a nightmare the next morning.”

Many people, who realised that there is no way out for them out of their country, are not venturing out of their homes because of fear of being robbed. People, Deccan Chronicle was told, were being robbed of their cars, their belongings on their person by individuals wearing the garb of Taliban fighters. “Yesterday, some people who were dressed like Talib fighters were robbing people but were chased and caught by the real Taliban members in the city I live,” the person said.

“The Taliban are saying they are not the same Taliban from some 20 to 30 years ago. They say they will not harm anyone. But people have memories of what happened with the Taliban earlier and they are afraid. We are haunted by those memories. There are also reports of some targeted killings by the Taliban in some provinces,” the former resident of Hyderabad said.