On Sunday morning, the Trishakti Corps of Indian Army and IAF launched air evacuation of tourists stranded in far-flung areas. 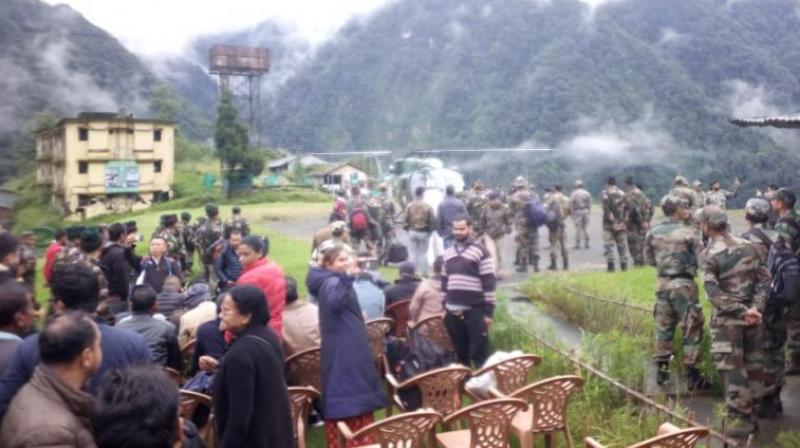 Helicopters have made several sorties from Gangtok and Sevok and evacuated approximately 100 persons, including the aged, women and children. (Photo: Deccan Chronicle)

Kolkata: In a joint operation, the Indian Army and Indian Air Force (IAF) have rescued around 100 stranded tourists from north Sikkim by airlifting them.

On Sunday morning, the Trishakti Corps of Indian Army and IAF launched the air evacuation of tourists stranded in the rain-hit far-flung areas.

Three days ago, areas of north Sikkim got cut off at several places due to incessant rain resulting into multiple landslides and road and bridges getting washed away. A number of tourists were stuck there.

On requisition for aid by the civil administration, the Army immediately pressed for helicopters of the Army Aviation and IAF for a swift evacuation of stranded tourists for last three days requiring urgent assistance, the Eastern Command said in a statement.

It elaborated that the helicopters have made several sorties from Gangtok and Sevok and evacuated approximately 100 persons, including the aged, women and children.

A pregnant woman and her husband were also evacuated.

In addition, medical aid was also provided to people having medical problems before airlifting. In anticipations of the situation, the Indian Army has also made necessary arrangements of tents, blankets and food for the stranded tourists.

A senior Army officer said that the evacuation operation will continue till all stranded people are moved out from the affected area.