Social activist Stephen Mathew has been on hunger strike for the past nine days demanding the arrest of rape-accused Bishop Franco Mulakkal. 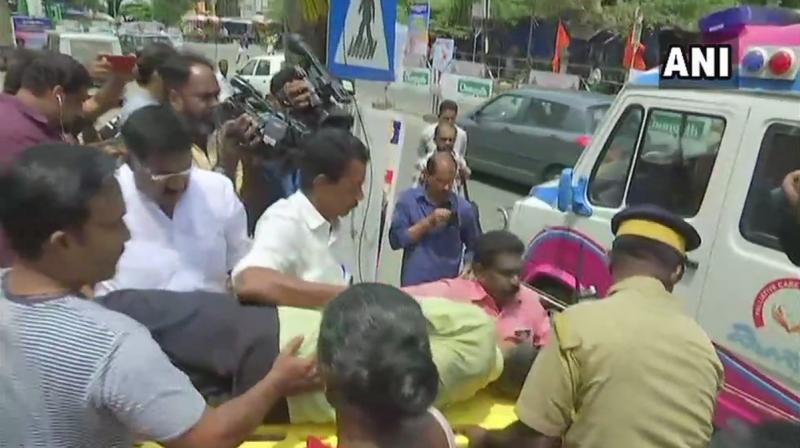 Social Activist Stephen Mathews was shifted to a hospital after his health worsened on the 9th day of hunger strike. (Photo: Twitter | @ANI)

Kochi: Social activist Stephen Mathew, who has been on a hunger strike for the past nine days demanding the arrest of rape-accused Bishop Franco Mulakkal, was hospitalised on Sunday after his health deteriorated.

The 54-year-old Roman Catholic Bishop has been accused by a Kerala nun of raping her several times between 2014 and 2016. She has also sought help from the Vatican in this regard.

On Saturday, Aloshi Joseph, a  member of the Catholic Reformation Movement had joined Stephen Mathew in the indefinite hunger strike demanding the arrest of Bishop Mulakkal.

On the same day, the Bishop stepped down, handing over charge of the Jalandhar diocese to Father Joseph Thekkumkattil and Father Subin Thekkedathu. He has been summoned for questioning by the police on September 19 and is expected to head towards Kerala soon.

Nuns from the Joint Christian Council to which Mathew belongs have been protesting as they seek justice for the victim. They had staged a sit-in protest at the High Court Junction bus station in Kochi to demand that the Bishop be arrested.