The COVID-19 case fatality rate due to the coronavirus infection further dropped at 1.63 per cent 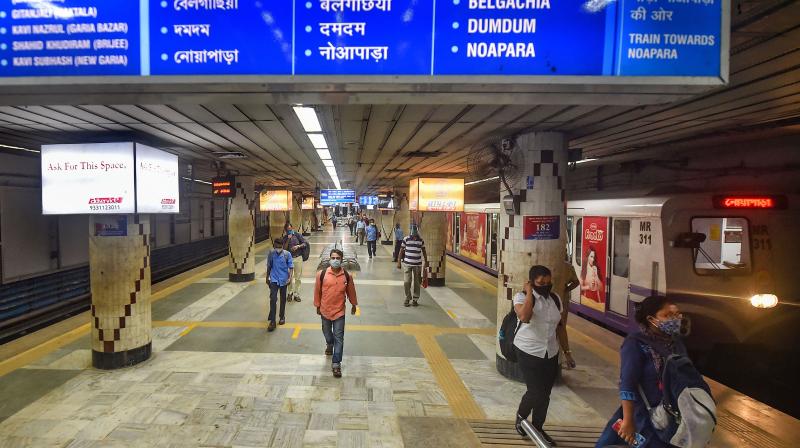 Commuters walk to exit a metro station as Kolkata Metro services resume in a graded manner, amid the ongoing coronavirus pandemic, in Kolkata. — PTI photo

With 90,123 fresh cases, India on Wednesday breached the 50-lakh mark in overall cases of novel coronavirus. On Wednesday morning the tally, as per union health ministry, was over 50.20 lakh while total number of deaths went past 82,066 with 1,290 new fatalities due to the virus.

It took 110 days for the COVID-19 cases in the country to reach one lakh while it had taken 59 days more to go past the 10-lakh post.

The COVID-19 case fatality rate due to the coronavirus infection further dropped at 1.63 per cent.

The health ministry stressed that more than 70 per cent of the deaths occurred due to comorbidities.

Amid reported cases of re-infection of coronavirus in fully cured persons, Director General of the Indian Council of Medical Research (ICMR), Dr Balram Bhargava said the cases of reinfection was very rare. “We have reinfection in many other illness too. So can have re-infection of COVID-19 as well, but it is not a matter of major concern because wherever it has happened, it has been mild,” Dr Bhargava said.

Talking about India's COVID-19 fight, he said, "If you look at the countries of Europe and the United States, they had a peak and then they came down and during that peak whether it was Spain, the UK or Sweden or Italy, there were a huge number of mortalities. Then there was a peak which came down and then they had a second wave which is recently occurring in those countries."

"Fortunately, we took learnings from that in India and we were able to distribute the curve in such a way that we did not have those large numbers of deaths and that was attributable scientifically because of a very effective lockdown that was imposed in the months late March, April and May. So, we did not really have a huge peak from that perspective," he said adding India's cases per million population is amongst the lowest in the world, which stands at 3,573 while the global average is 3,704.

Meanwhile, union health minister Dr Harsh Vardhan told Rajya Sabha that the Department of Pharmaceuticals has increased the production of hydroxychloroquine (HCQ) and the ministry has issued 10.84 crore tablets of the drug to states and union territories as on September 11. He added the re-purposed HCQ is being used to treat mild but high risk and moderate COVID-19 cases. "India has also exported it (HCQ) to more than 140 countries," Dr Vardhan said.