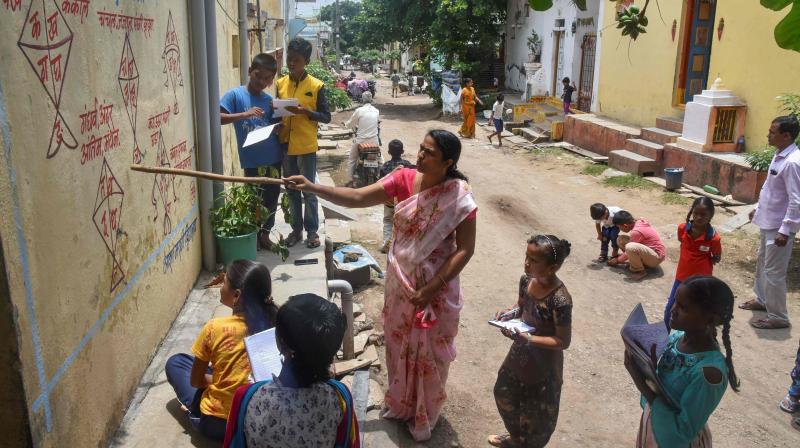 Are the days of physical classrooms over? (AFP representational image)

These are just two data points from the many contained in a grim status report on state of government and private schools during the COVID-19 pandemic by OXFAM India. The report surveyed 1158 parents and 488 government school teachers across five of India’s poorest states: Bihar, Chhattisgarh, Jharkhand, Odisha and Uttar Pradesh.

While government and private schools across India jumped on the e-learning bandwagon after the lockdown, the survey results show that most government teachers were not able to adapt to the new mode of teaching. At least 84 per cent of the teachers in government schools struggled with delivering education via digital mediums. Two out of every five teachers lacked the necessary devices to deliver education digitally, with UP and Chhattisgarh faring the worst.

Several recent media reports have highlighted how innumerable teachers in government and private schools struggled to use a simple web cam or mobile phone to teach students. A government school teacher was also quoted by a newspaper as saying that she didn’t even know to recharge her mobile.

Ankit Vyas, the author of the Oxfam India report, stressed on developing basic infrastructure of schools first – electricity connection, computer lab etc – and ICT training of teachers before proceeding down the path of digitisation. He added that 35.6 per cent of the country’s elementary schools lack an electricity connection and 63.2 per cent of schools have no functional computer.

Not just teachers, but also 80 per cent of the parents of children attending private school and 75 per cent parents of students enrolled in government schools complained that they had difficulty accessing online education. No or poor internet connectivity and expensive data packages were the two biggest impediments, as per the report.

While the Supreme Court in March instructed the states to ensure mid-day meals were given to students during school closure, the ground reality seems to be bleaker. As per the survey, 35 per cent of the children did not get the meals. The remaining 65 per cent were not really better off – only 8 per cent received cooked meals while 53 received dry rations, the report noted.

“Uttar Pradesh fares the worst where 92 per cent children have been deprived of their mid-day meals (in any form) while Chhattisgarh fares the best where over 90% children have received mid-day meals,” the report said. However, this observation, particularly about UP, was in sharp contrast with that of the Centre, which on Monday had placed the Yogi Adityanath-led government on top for disbursing Food Security Allowance to students.

The continued closure of schools, the issues surrounding mid-day meals and the excessive focus on e-learning could lead to at least a third of the government school students, especially from marginalised sections, quitting studies. Several previous studies had shown a positive relationship between mid-day meals and school enrolment. However, one health crisis could now strain India’s efforts towards achieving full school enrolment.

Despite struggling with digitisation issues, private schools moreover added the burden of hiked fees on parents. The report said that 39 per cent of parents reported paying hiked fees for the Academic Year 20-21 despite state governments urging schools to either defer or reduce the fees. In the case of Uttar Pradesh and Odisha, over half of the parents had to pay hiked fees, the report noted.

Particularly, in Odisha, where the CM only “appealed” to private schools over fee hike, 35 per cent respondents said they were pressurised to pay fees. To avoid such a scenario from repeating itself, the report rightfully stressed upon better regulation of private schools to protect the rights of parents.

The report also reiterated the non-inclusive nature of private schools, noting that boys were more likely to be more enrolled than girls. Amid the bleak economy scenario accentuated by the lockdown, the report also highlighted that at least 50 per cent of the respondents spent at least one-fifth of their income on private schooling. With the economy likely to post bleak numbers next quarter too, the shabby state of e-learning infra along with high data costs could probably deprive students coming under the Right to Education criteria of e-education.

With schools set to be re-opened in a phased manner, several stakeholders would get involved in ensuring a smooth transition to the post-COVID era. Batting for better Centre-states co-ordination for tackling the issue, Vyas suggested that both need to consult with civil society, teachers and community members to understand challenges on the ground and develop specific guidelines for schools.

PM Modi departs for three-day visit to US