Our courts are trying the Mumbai attacks’ suspects, but they (Indian authorities) are letting all the terrorists free, says Pak official. 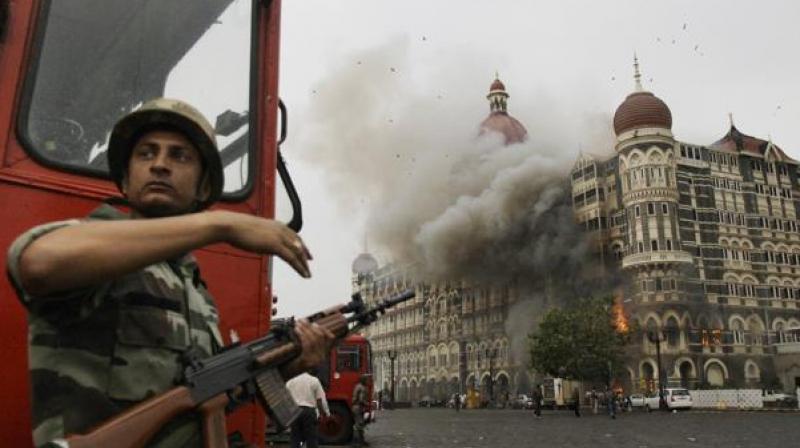 A file photo of Taj Mahal hotel during a gun battle between security forces and militants inside the hotel in Mumbai in 2008. (Photo: AP)

Islamabad: Almost nine years after the 26/11 Mumbai terror attacks, the trial of seven suspects in Pakistan’s special anti-terrorism court seems to have hit a dead-end.

Pakistan says that the trial can’t proceed due to the non-availability of 24 Indian witnesses, and appends to that argument its grouse — that while it is doing all it can to bring the perpetrators of the attacks to justice, India has failed to prosecute the culprits behind the Samjhauta Express bombing of February 18, 2007.

The bombing killed 68 passengers, including 42 Pakistanis, while the train was on its way from Delhi to Lahore.

In March last year, Pakistan officially asked Delhi to send 24 witnesses to Islamabad to depose before the court.

India rejected the request, and in response sent a formal missive to Pakistan in September 2016, asking it to complete the trial at the earliest, claiming that enough evidence had been shared to prosecute the accused.

In March 2017, India again responded to Pakistan’s request for 24 witnesses, this time asking Pakistan to re-investigate the 2008 Mumbai terror attack case and put on trial Jammat-ud-Dawa chief Hafiz Saeed who is under house arrest in Lahore under the anti-terrorism law.

Saeed, who carries a reward of $10 million, was put under house arrest after the Mumbai attacks, but was freed by the court in 2009 because of lack of evidence.

Officials say that Pakistan has no issue to try any suspect of Mumbai attacks provided it has evidence against him.

“If India provides some strong evidence against Hafiz Saeed in Mumbai case, we will try him,” a Pakistani official said, adding that Lakhvi too was released on bail because of lack of solid evidence against him.

The anti-terrorism court in Islamabad has completed recording the statements of all witnesses in Pakistan and their cross-examination. Other relevant record has also been presented before it. Officials say all that's required now is the deposition of 24 Indian witnesses to conclude the trial.

Azhar Chaudhry, special prosecutor of Pakistan’s Federal Investigation Agency (FIA), says that Pakistan had done its bit to end the case, but India has not cooperated.

Without the statements of Indian witnesses “this case isn’t going anywhere,” Mr Chaudhry said, adding that with the available evidence so far, the court may not be able to convict the suspects.

“When we went to India they did not give us access to the witnesses. It was a futile exercise,” he added. 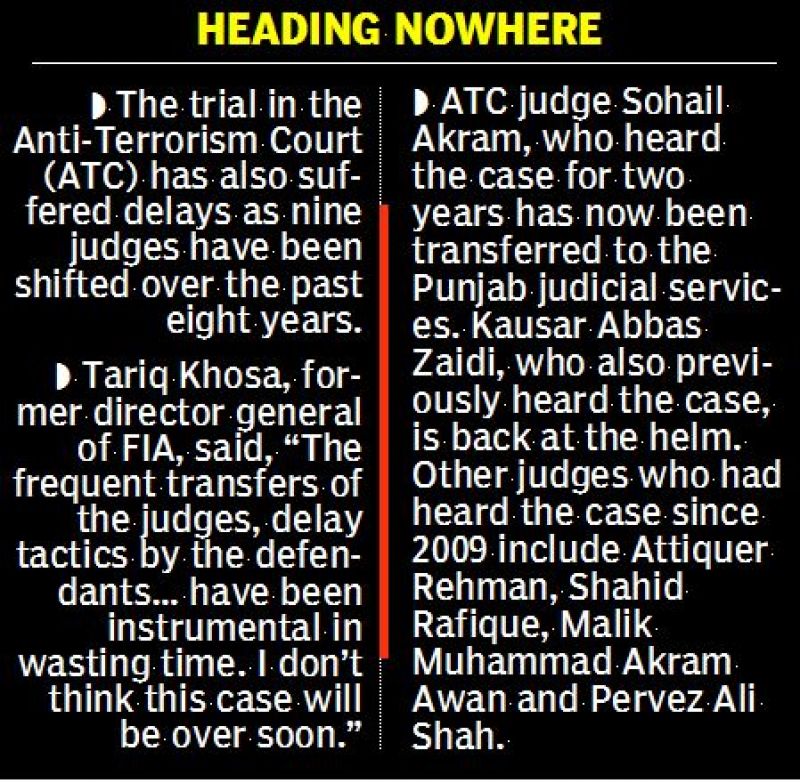 An eight-member Pakistani judicial commission, comprising special prosecutors and the defence counsel, had visited Mumbai on September 7, 2013, to record the statements of prosecution witnesses, including magistrate R.V. Sawant Waghule, who had recorded the confessional statement of  Ramesh Mahale, the chief investigation officer of the case, and Ganesh Dhunraj and Chintaman Mohite, the two doctors who had conducted the post-mortem of the terrorists killed during the attacks. due to an "official understanding" between the Pakistani and Indian governments, the commission had not cross-examined them.

The statements of the Indian witnesses were supposed to be used as evidence in the trial. But Lakhvi’s lawyer challenged the legality of the commission’s proceedings on the basis that its member were not allowed to cross-examine witnesses.

The question raised by Lakhvi’s lawyer didn’t just add to the delay of the trial, but rendered the entire exercise useless.

The special court declared the proceedings of the commission illegal.

Tariq Khosa, former director general of FIA, says that since the Mumbai attacks were allegedly planned inside Pakistan, Islamabad has a duty to investigate it seriously.

Pakistan must ensure punishment to the perpetrators of the Mumbai attacks, he said.

“This can’t go on forever. We have to come to a conclusion. The delay tactics don’t work for long,” he added.

Last month, the court ordered the FIA to appoint a focal person to press for bringing 24 Indian witnesses to Islamabad to record their statements. Delhi has not changed its stance.

The continuing stalemate has given an opportunity to India-baiters in Pakistan to allege that New Delhi – which attacks Pakistan on terror at every given opportunity — is itself not ready to help punish Mumbai attack suspects.

Reports say that if India does not send the witnesses soon, the prosecution will ask the court to pronounce its verdict regardless.

“So far the suspects are accused. They can be convicted only if the court finds them guilty. Without the witnesses’ statement and solid evidence, the court cannot sentence anyone. India is behind all the delay,” he said.

Pakistan foreign minister Khawaja Mohammed Asif too says that the court needs evidence to punish the accused. “India is not ready to give any evidence,” he said.

“Pakistan is committed to eliminate terrorism but this does not mean hanging people without evidence. India is not cooperating, how can we carry forward the process,” he said.

While rubbishing the charge that Pakistan is deliberately delaying the trial of the Mumbai attack suspects, Mr Asif also questioned New Delhi’s commitment to bring the perpetrators of terror acts on its soil to book.

He rakes up the issue of the alleged failure of Indian authorities in prosecuting the culprits behind the 2007 Samjhauta Express bombing in Panipat, Haryana.

“Our courts are trying the Mumbai attacks’ suspects, but they (Indian authorities) are letting all the terrorists free. They are expecting us to punish the suspects without evidence while they themselves are not trying people despite solid evidence,” said Mr Zakaria.

Calling the Rashtriya Swayamsevak Sangh (RSS) a fundamentalist organisation which has, over the years, made inroads into each and every state institution, he said, “It is an established fact that the RSS not only has links with other Hindu terrorist outfits but it also harbours terrorists. We are concerned at the way the Hindu terrorists involved in Samjhauta Express terrorist attack are being acquitted systematically.”

About 166 people were killed when 10 members of Pakistan-based LeT carried out a series of 12 coordinated shooting and bombing attacks from November 26 to 29, 2008, across Mumbai, India’s commercial capital.

The lone LeT attacker caught alive, Mohammed Ajmal Amir Kasab, was put to trial in India and hanged on November 21, 2012, after being held guilty of 80 offences, including murder and waging war against India.

That may be the only closure India gets in the trial of 26/11 as it prepares to mark its ninth anniversary next month.