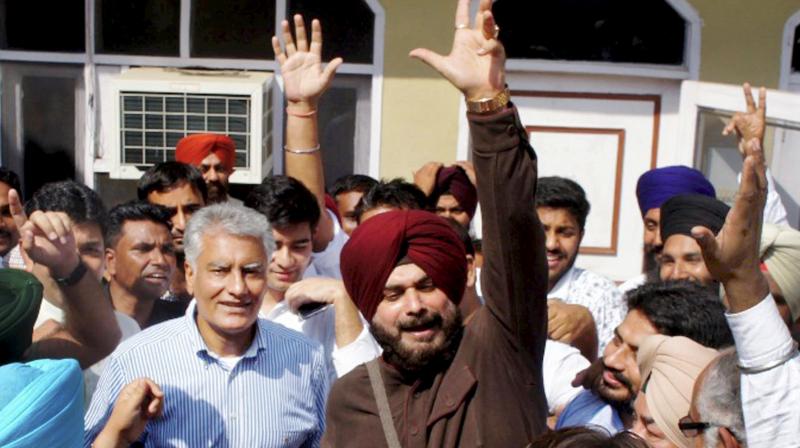 New Delhi: It was a day of mixed fortunes for the Congress on Sunday. While the party was jubilant over its electoral victories in Punjab and Kerala bypolls, in Himachal Pradesh it received a jolt with former union minister Sukh Ram and his son and sitting state minister Anil Sharma, switching loyalties to the BJP.

Interestingly, the Congress is in a jubilant mood after the two massive bypoll wins. Many leaders have started openly saying that this is the beginning of the downfall of the BJP.

In Punjab, the Congress trounced the BJP by winning the Gurdaspur Lok Sabha seat with a margin of 1,93,219. Sunil Jhakhar, Punjab Congress chief and the Congress candidate from Gurdaspur wrested the seat from the BJP. Sitting MP of the BJP Vinod Khanna had passed away and the seat had fallen vacant.

Speaking to reporters after the victory in Gurdaspur, Punjab minister and actor-turned- politician Navjot Singh Sidhu said, “This (victory) is a big slap on the face of jija-saala (SAD chief Sukhbir Badal and his brother-in-law Bikram Singh Majithia). Today BJP will realise that Akali Dal in Punjab has become a burden. Time and again people have reprimanded them. It will be demoralising and send them (SAD-BJP) packing.” 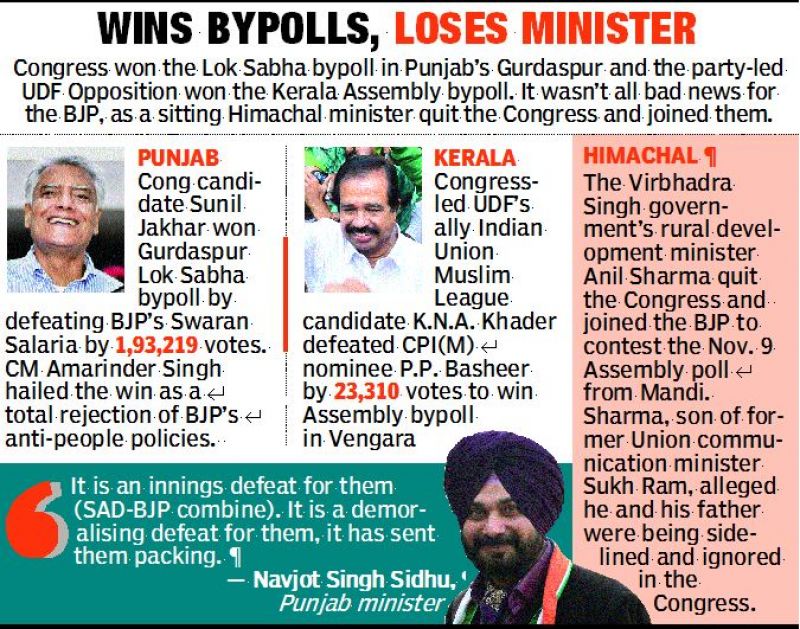 Chief minister Amarinder Singh hailed the Congress win as a total rejection of BJP’s anti-people policies of the BJP and its ally the SAD and said it underlines the “political annihilation” of the AAP.

In Kerala, the Congress-led UDF’s ally Indian Union Muslim League won the Vengara Assembly berth by 23,310 votes. It may be recalled with its eye on the Assembly by-poll the BJP had intensified its rallies and meetings in the state.

Recently, BJP chief Amit Shah had kicked off a yatra against the ruling LDF government’s alleged “reign of terror” and “political violence” against party and RSS workers.

A battery of senior BJP leaders and central ministers had toured Kerala, agitating against the ruling LDF government.

On a day of setbacks, the BJP got a shot in the arm in Himachal Pradesh where a sitting minister quit the Congress and joined the saffron party.

The Virbhadra Singh government’s rural development minister Anil Sharma joined the BJP to contest the Nov. 9 Assembly poll from Mandi. Mr Sharma, son of former Union Communication Minister Sukh Ram, alleged he and his father were being sidelined and ignored in the Congress.

He said, “I’m not surprised at all. We had known it for a long time that they were contemplating it. We are not affected by it, Sukh Ram has such a record in the past. He is the first well known Aaya Ram Gaya Ram in Himachal Pradesh.”