India   All India  16 Oct 2018  Festival feast from the Northeast
India, All India

Festival feast from the Northeast

The icing on the cake will the traditional and fusion cuisine Manipuri, Khasi, Assamese, Naga and Sikkimese dinners. 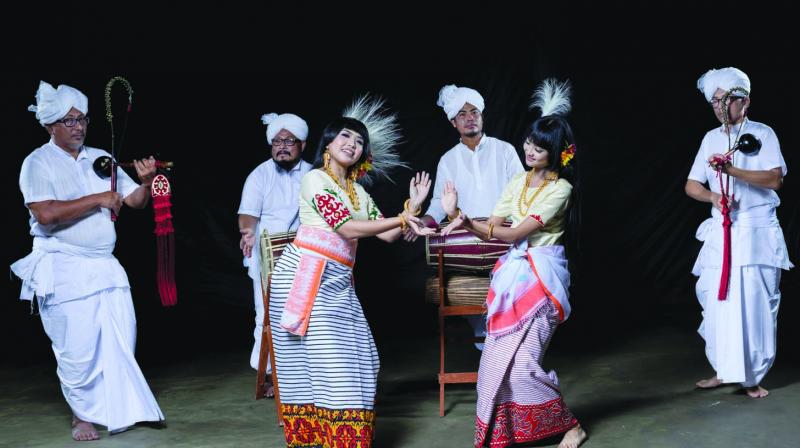 The North East is quite a dynamic region with a dizzying variety of social, cultural and historical elements throughout the seven sisters Arunachal Pradesh, Assam, Manipur, Meghalaya, Mizoram, Nagaland, Tripura and a brother, Sikkim.

I'm definitely excited about the upcoming India International Centre, New Delhi's annual Festival of the Arts theme — Experiencing the North East from 27th-31st October and exhibitions on through 10 November. These annual festivals always thoughtfully planned to integrate performances, exhibitions, films, cuisine and discussions, but this year is definitely one of the best and most challenging they have taken up.

If you happen to have read my columns before, my passion, concern and appreciation for the cultures of North East India are clear. But quiz me on the various Naga tribes and I will falter after a few, let alone knowing anything of things like the Buddhist heritage sites in Tripura.

The North East is quite a dynamic region with a dizzying variety of social, cultural and historical elements throughout the seven sisters Arunachal Pradesh, Assam, Manipur, Meghalaya, Mizoram, Nagaland, Tripura and a brother, Sikkim.

Given how little any of us can actually know about all the contemporary as well as traditional cultural aspects of this major region of India, I would highly recommend that you try for total immersion in the rich fare on offer, rather than the usual pick and choose.  This is not a festival where, if you skip something, you can see it a few months later.  It may no longer be a minimum 4 day train journey to reach but the north eastern states are way out of the beaten path. This is a golden opportunity gain entre to a lot of wonderful arts, artists, and writers, not to mention food that you haven't tasted before.

Performances are interspersed among the 11 am. through evening daily activities. The well-known Shillong Chamber Choir, winner of TV's 2010 India's Got Talent  and three gold awards at the 6th World Choir Games for Musica Sacra, Gospel and Popular Music, presents the inaugural concert on October 27th at 6:30 p.m. at the Fountain Lawns.

Rare pre-Vaisnavite Lai Haraorba ritual dance music, most of which I am positive you have never heard before, will be performed the next morning, Sunday, 28th October at 11:00 am. in the C.D. Deshmukh Auditorium. Mangka Mayanglambam with her Laihui Ensemble, Manipur preserves and propagates the ancient traditional performing arts through performances, with a modern and contemporary perspective.

You have probably seen a short Maibi ritual dance performed as part of the usual variety compilation in urban presentations of Manipuri, but this entire performance is from the Lai Haraoba annual ritualistic festival celebrated to propitiate the traditional and ancestral deities, “”Umang Lai”. The Amaiba (priest), Amaibis (Shaman priestess) and the pena player (the fiddler/balladeer) perform the ritual dances.  How life (in Manipur/the World) was created, procreation of the human being on through how to weave cloth and build a house are ritual dances rarely, if ever,  presented in Delhi that  I was fortunate to be taught in Imphal by Ranjani and Kumar Maibi  in the early 1970s.

At 2 pm. the same day an IGNCA documentary of the Dances of the Lai Haraoba will be shown as part of a Saturday/Sunday 5 film Aribam Syam Sharma Retrospective. The filmmaker will be in conversation with L. Somi Roy later that Sunday afternoon.

After the retrospective, New Cinematic Voices: A Festival of Films will be presented from 29th to 31st October 2018 bringing together nine contemporary feature films from Assam, Meghalaya, Nagaland and Mizoram.

Nagaland Jazz, Funk, R&B and Blues Sunday evening and a Sikkimese rock concert by Girish and the Chronicles on Tuesday the 30th are not the usual fare of IIC's classical culture, but they haven't shied away from celebrating contemporary music expressions from the region.

We all are familiar with the extraordinary theater work coming out of Manipur; now we get to discover a contemporary play by a woman director, Lapdiang Syiem from Meghalaya, called A Being — Human; Being Human Human Beings on Monday, the 28th at the Fountain Lawns.  This physical theatre piece is constructed around stories of identity loss, displacement and violence, and how they are portrayed on social media and raises questions on how the body becomes a mere object. Performed in a highly stylised, minimalist form, it is meant to be provocative with a focus on the performer's body as a live narrative itself.

The culminating final performance on Wednesday, October 31st is appropriately a gorgeous raas leela by the leading national institution for this living tradition, the Jawaharlal Nehru Manipur Dance Academy in Imphal.

A unique feature of this year's festival is a day devoted to presenting writers and poets. Conceptualized by Ravi Singh of Speaking Tiger, Air Marshal Naresh Verma, Director of IIC will introduce “These hills we come from…” Select Voices from the Northeast India. on Monday, the 29th at 11 am. in the C.D. Deshmukh Auditorium followed by a talk on Linguistic Diversity of North East India by Dr. L. Thangi Chhange.

I'm specially looking forward to L. Somi Roy talk on his mother M.K. Binodini Devi's Crimson Rainclouds. Meeting them both in Imphal in 1974 made it possible for Somi to introduce me to R.K. Dani Singh in my Guru Singhajit Singh's Triveni Ballet and take his guidance for costumes and musicians over the years.

The day of northeast literature will cover Storytelling: oral and written word, writing: politics, linguistics, anthropology and society plus a poetry session and lots of conversation.

Exhibitions include The Monpas and their Mountains  — photographs on the Monpas of Arunachal Pradesh and the monastic world of Tawang by Vinay Sheel Oberoi on view in the Quadrangle Garden and Tripura: Time Past and Time Present, an exhibition on the history of the state, its people, literature, craft tradition and archaeological heritage curated by M.K. Pragya Deb Burman, convener of the Intach Tripura Chapterin Conference Room I.

Blurred Perimeters features contemporary art from Arunachal Pradesh, Assam, Manipur, Meghalaya, Mizoram, Nagaland, Sikkim and Tripura curated by Wahida Ahmed. This exhibition draws on the socio-cultural landscape of the region to create something new and a world of love, peace and cooperation transcending geographical contiguity by blurring the perimeters. This exhibition will remain on view until  November 10 at the IIC Art Gallery in the Kamaladevi Complex.

Last but certainly not least, Unbroken Threads —Broadening Narratives present “mantles of merit and status” of the Ao, Khiamniungan, Sumi, Chakhesang and Yimchungru of Nagaland; Manipur — threads of divine myth; heirloom shawls and textiles of the Mizos; and contemporary textiles and designer couture from the North East. This may help us sort out our cultural geography of the North East! Curated by Ms Sentila T. Yanger, Padmashree for Tribal Weave, and on view at the Gandhi-King Memorial Plaza, Mangka Mayanglambam will present a song from the Lai Haraoba tradition of how the knowledge of weaving was transmitted to the Meite in the inaugural function.

In collaboration with the North East Council (NEC), Ministry of Development of North Eastern Region (DoNER), IIC is allowing, for the first time, stalls covering tourism, culture and food.

The icing on the cake will the traditional and fusion cuisine Manipuri, Khasi, Assamese, Naga and Sikkimese dinners. For these you need to make a reservation via a member. Everything else is open to all without tickets or invitations.

Sharon Lowen is a respected exponent of Odissi, Manipuri and Mayurbhanj and Seraikella Chau whose four-decade career in India was preceded by 17 years of modern dance and ballet in the US and an MA in dance from the University of Michigan. She can be contacted at sharonlowen.workshop@gmail.com