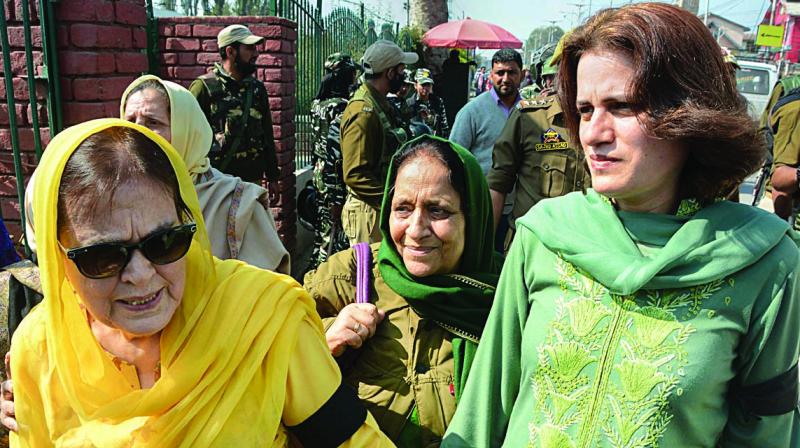 Farooq Abdullah’s sister Suriya and daughter Safiyah during a protest against the abrogration of Article 370 in Srinagar on Tuesday. (Photo: PTI)

SRINAGAR: Few hours after a semblance of monitored normalcy returned to the Kashmir Valley on Monday afternoon as the government restored post-paid mobile services on all networks, in the evening the administration harshly stopped SMS services. No reason was given for withdrawal of the service, but in a move that revealed how edgy the state government is, the police on Tuesday arrested more than one dozen elite Kashmiri women as they began a peaceful march along Srinagar’s Moulana Azad Road to protest the abrogation of Article 370 and splitting the state into two Union Territories.

They were subsequently produced before a magistrate who sent them to Srinagar’s central prison. The police sources said that they have been charged with “breaching peace” and a case has been registered against them under the relevant provision of the law.

Sources said that the jail authorities later conveyed to the police that there is no space in the central prison to accommodate these women and it should consider shifting them to some other place. There was no official report about whether they had been shifted elsewhere.

Post-paid mobile service was restored in Kashmir Valley on Monday, the 72nd day after it was suspended on August 5, when the Centre revoked Jammu & Kashmir’s special status.

Now only voice calls can be made on post-paid phones. SMSes, prepaid mobile phones and other Internet services, including WhatsApp, remain deactivated.

Service providers said that they received a communiqué from the state administration late Monday evening asking them to withdraw SMS facility on all post-paid mobile phones that were restored earlier during the day.

“We were asked by the government to block individual and bulk short messaging service on Monday evening. We acted upon the directive immediately,” said general manager BSNL Nazir Ahmad Joo.

The move evoked sharp criticism from subscribers. “It is bizarre that the SMS facility was withdrawn within hours of their restoring the post-paid mobile service. They have taken us for a ride again,” said Abdul Majeed Khan, a subscriber.

On Tuesday, the women protesters, wearing black arm bands and holding placards, were not allowed by the police personnel to assemble in a public park near city centre Lal Chowk and were asked to disperse peacefully. However, they refused to disperse and tried to stage a sit-in following which the women CRPF personnel forcibly evicted them and bundled them into police vehicles, witnesses said.

The police also tried to stop the protesting women from distributing a statement to the media persons covering the protest.

The statement said, “We the women of Kashmir disapprove the unilateral decision taken by the Government of India to revoke Articles 370 and 35A and downgrade and split the state of Jammu and Kashmir.”

Earlier, one of the protesters while speaking with reporters, said, “They say the people of Kashmir, especially women, are happy over the scrapping of Articles 370 and 35A. We’re not. They should find out why.”

Another protester said, “The women of Kashmir feel betrayed, humiliated and violated as people”.

The protesters also demanded immediate release of detainees and demilitarisation of rural and urban areas and expressed their outrage against sections of national media for their “false and misleading” reporting of ground realities in Kashmir. This charge was also levelled in the statement.

Deputy inspector general of police (Central Kashmir), V.K. Birdi confirmed the arrest of about 13 women protesters and said they were sent to central jail by the magistrate for breaching peace.